Democratic socialism was the battle cry. The goal was to permeate and penetrate and then control from within. This massive social engineering was carried out under the banner of reform and social justice. The progressive era was a time when both corporatism and socialism received major steroid injections.

Progressives believe that the founders’ view, that all men are created equal with certain inalienable rights, is naive and unhistorical. Freedom is something to be achieved, it is not a gift from God or nature – it is a product of human making – a gift of the state. They define God as human freedom achieved through the right political organization, or simply deny his existence.

The state is divine and the private sphere is selfish and oppressive. They don’t believe that ownership of private property is necessary. Government must protect the poor and other victims of capitalism through redistribution of resources, anti-trust laws, and complete control over commerce and production through regulation. Government must be involved in the spiritual development of its citizens through protection of the environment, through education and spiritual uplift through subsidy and promotion of the arts and culture.

Only those educated in top universities are capable of governing. Politics is far too complex for the average man. Educated leaders of advanced nations should not hesitate to rule the less advanced nations in the interest of ultimately bringing the world into freedom. A strong central government must run the country. Politics in the sense of favoritism and self-interest should disappear and be replaced by the universal rule of enlightened bureaucracy.

When Theodore Roosevelt took office in 1901, he attempted to move the Republican party toward progressivism. Personally,  I don’t think he failed.  During his term he appointed three progressive Supreme Court Justices – Oliver Wendell Homes, Jr., a proponent of legal realism; William Rufus Day, and William Henry Moody, a supporter of enhanced federal powers. Using the coined phrase “Square Deal” to describe his domestic agenda, he pursured numerous anti-trust suits and used his office to push for the courts to yield to the wishes of the executive branch. In my opinion, the worst of his socialist polices was the Antiquities Act of 1906, giving the President authority, through executive order, to restrict the use of public owned land by the federal government. Even thought the Act was intended to preserve small historic sites, Roosevelt’s first use of the law was a major land grab for Devils Tower National Monument, followed by another large land grab for the Grand Canyon National Monument.

Woodrow Wilson, another progressive, believed that the founder’s system of checks and balances was the main cause of problems
in governing. He saw the Constitution as cumbersome. During his term in office he gave us the 16th Amendment, establishing the Federal Income Tax; the Federal Reserve Act, establishing a central bank; The Sedition Act, making it unlawful to speak out against the War; the Overman Act, giving him much personal power as head of the war machine; the War Revenue Act, increasing the Federal Income Tax level to 67% and then to 77%; the Espionage Act, hindering free speech during the War; numerous regulations on public utilities; educational reform; and anti-trust reform.

The eugenics movement also came into play during this time in both Europe and America. The term, formulated by Sir Francis Galton in 1883, drawing on the work of his half-cousin, Charles Darwin,  was the study and practice of selective breeding applied to humans with the aim of improving the species. 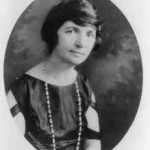 The Face of Evil

Eugenics regarded the movement as a “social philosophy” for the improvement of human hereditary traits. It involved the identification and classification of individuals and their families, including the poor, the mentally ill, the disabled, promiscuous women, homosexuals and entire racial groups (blacks, Italians, Jews) as degenerates to be taken care of by the use of segregation, institutionalization, sterilization, euthanasia, and in some extreme cases, such as Nazi Germany, mass extermination.

Is the eugenics movement still in vogue? Think designer babies!   Think Abortion! And, the next time someone laughs when you mention “Death Panels“, tell them to read about this horrific period in our history. Watch trailer of Black Genocide in the 21st Century .

The  progressive movement also brought in the Social Gospel, a Christian movement applying Christian ethics to social justice. Social Gospel leaders were post-millennialist believing that the second coming couldn’t happen until mankind had rid itself of social evils. They urged government action to accomplish social reforms and refused to hold the poor solely responsible for their plight, believing that capitalism was the root cause of all evil. The three initial main players were Richard T. Ely, an economist, Washington Gladden, and Walter Rauschenbusch. Read the Humanist Manifesto here.

John Dewey, known as the “the father of modern education, was an avowed socialist and co-author of the “Humanist Manifesto”, and “The Primary Education Fetich” which was the catalyst behind education reform. Dewey, who belonged to no less than 15 Marxists front groups, taught the professors who trained the teachers to indoctrinate the kids. “You can’t make socialists out of individualists. Children who know how to think for themselves spoil the harmony of the collective society.” Progressives would eventually take over the National Education Association (NEA) and turn it into a powerful political  instrument to pressure the government to pour billions into public schools in order to further their social agenda. In 1967, the NEA Secretary   said “the NEA will become a political power second to no other special interest group”.  THEY KEPT THEIR WORD.

This progressive era, spurred on by the Intercollegiate Socialist Society (ISS), a Fabian Socialist front group, were also instrumental in founding numerous social organizations, and labor unions. The groups include, but are not limited to, The ACLU, The NAACP, Industrial Workers of the World, the New School for Social Research at the New School in New York, and numerous teachers unions.
Comments from previous posting

There is a powerful film out now which exposes the EUGENICS movement and ties it to
BLACK GENOCIDE . It is called – Maafa21 – you MUST Get the DVD and watch all
2.5 hours ! Excellent research ! See trailer here: http://www.maafa21.com

I watched the trailer – everyone should see this DVD. A link to the tailer on Black Genocide in the 21st Century has been added to the article.

1 comment for “THE PROGRESSIVE MOVEMENT: A Rose By Any Other Name”