A preliminary report from the International Programme on the State of the Ocean (IPSO), another of your friendly U.N. Agenda 21 agencies, is moving away from the sky is falling global warming to the oceans are dying global warming agenda.  The 21 page report titled “International Earth System Expert Workshop on Ocean Stresses and Impacts” can be read here in pdf format.

IPSO’s Director Alex Rogers says that “this is a very serious situation demanding unequivocal action at every level. We are looking at consequences for humankind that will impact in our lifetime, and worse, our children’s and generations beyond that.” According to the report, low oxygen and lack of oxygen that creates ‘dead zones’ in the oceans, warming and acidification, will inevitably cause a mass marine extinction if swift action isn’t taken to improve conditions.   Remember Obama’s motto – never let a crises go to waste!

The swift action required – humankind must change their behavior.   That has a familiar ring! The IPSO calls for changes like the immediate reduction of Co2 emissions, coordinated efforts to restore marine ecosystems, and universal implementation of the precautionary principle so “activities proceed only if they are shown not to harm the oceans singly or in combination with other activities.”      In order to implement these plans, the world’s nations must ratify the U.N. Convention on the Law of the Seas which, by the way, puts the U.S. oceans under control of the United Nations and international law.

Isn’t it an amassing coincidence that CIA Director Leon Panetta was at one time co-chair of the Joint Ocean Commission Initiative that pushed for the U.S. to ratify the U.N. treaty?  The same Panetta that Obama wants to become his new Secretary of Defense!  The same Panetta who hangs around with the likes of John Podesta of the Soros funded Center for American Progress and is associated with the Citizens for Global Solutions and the World Federalist Movement, both of which push for a one world government.

The U.N. Law of the Sea Treaty (LOST) is a transfer of sovereignty, and taxing authority  to a new instrument of World Government.

Jim Backlin, V.P. for Legislative Affairs of the Christian Coalition said that the treaty would hamper our war against terrorism by “seriously impairing the Navy’s ability to stop and search vessels, a huge sacrifice of U.S. sovereignty and a serious threat to our national security. . .”

Tom DeWeese, president of the American Policy Center said that the treaty would give decision making power over the world’s oceans to the United Nations.  The treaty “blatantly takes away our rights to free movement and private enterprise, and endangers our national sovereignty and independence.”

Frank Gaffney, president of the Center for Security Policy said that this treaty would constitute the most egregious transfer of American sovereignty, wealth and power to the U.N. since the founding of that ‘world body’. ”

John Griffing, III, president of the Forum for American International Relations said that this treaty “has implications for our nuclear submarines and their strategic positions around the globe, as it places restrictions on their movement in various areas of the globe.  It’s not a stretch to imagine the U.N. denying the U.S. access to the Mediterranean while allowing terrorist nations unfettered access to our territorial waters.”

LOST would create the International Seabed Authority with power to regulate the world’s oceans and the power to levy international taxes.  President Ronald Reagan refused to sign the treaty  for those very reasons.  The treaty has not been amended or formally altered since 1982.  While President Clinton reached an accord called “The Agreement” in 1994 that supposedly addressed some of Reagan’s concerns, the “Agreement”  does not actually replace or modify the relevant sections of the treaty, therefore, its main goal (world government) remains the same.

This treaty is grounded in un-American concepts of global socialism and world government.  It would violate American sovereignty, hurt our 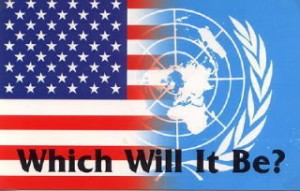 national security, stifle our economy and exploration for natural resources in the sea and allow taxes and fees to be imposed on industry by a U.N. agency.   It would also force us to share our ocean mining and exploration technology and void many of our security treaties with other nations.

The law of the Sea Treaty runs contrary to both America’s national and wartime interests.   The Obama Administration is attempting to lay the final foundation for world government through the United Nations.  Americans  must make a stand and demand that the Senate reject any attempts to ratify this treaty.

← YOU CAN’T DEFEND THE INDEFENSIBLE
FBI – GRANTS ITSELF NEW POWERS →