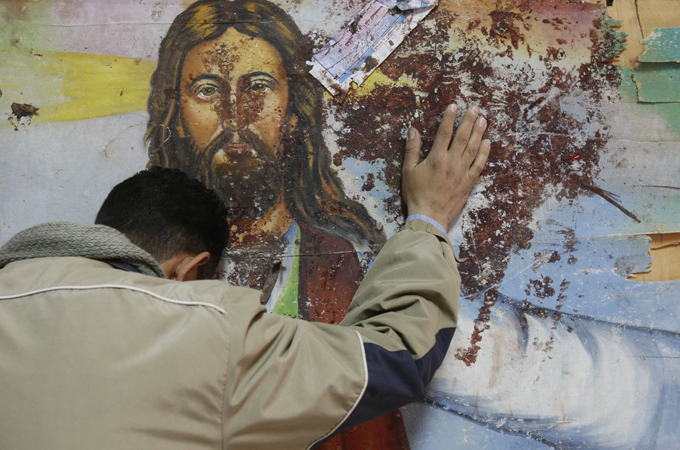 1.5 million Christians living in Iraq say they are living in constant fear amid the drawdown of American troops.  Muslim insurgent groups have killed about 800 Christians with countless others taken hostage.  More than half of Iraqi Christians have fled their homes, most exiled to neighboring Jordan and Syria and more plan to flee.  In 2003 the number of Christian families living in the Iraqi capital was 40,000 – now there are barely 50 left according to figures given to Aid to the Church in Need, a Christian charity.

“Iraqi Christians are on the verge of extinction” said John Eibner, the CEO of Christian Solidarity International USA.  “What we gave American lives to liberate this country for was not this” said Carl Moeller, president and CEO of Open Doors with Brother Andrew, a Christian aid group active in Iraq.  “Most Americans would be appaled at the lack of liberty in a country we fought and died to liberate, and that we are watching slowly disintegrate into sectarian chaso.  The church is bleeding.”

October 31st, 2010,  10 jihadi Muslim, some dressed as Iraqi police officers, stormed into Our Lady of the Deliverance Catholic Church in Baghdad on All Saints Eve,  and massacred 58 parishioners and wounded 78.    Survivors of the attack said that one assailant shot a pregnant woman after her dying husband tried to protect her and their unborn child.  Another assailant ordered a young parishioner to convert to Islam on the spot, then shot him in the head.

The White House issued a generic statement after the attack not mentioning it was against Christians.    Nina Shea, commissioner on the U.S. Commission on Interntional Religious Freedom and the director of the Hudgson Institute’s Center for Religious Freedom called the White House response “extremely political correct and uncaring.” Rabbi Abraham Cooper, Associate Dean of the Simon Wiesenthal Center in Los Angeles agreed saying “We are all stunned by the barbrity of this onslaught.  We share the grief of the survivors, the families of victims and our many friends in Christian communities worldwide. But we are also outraged by the indifference of the international community.  The only thing more outrageouos than the systematic slaughter of families gathered in their place of worship is the overwhelming silence at this heinous act.”

Al-Qaida has said it wants to drive Christians out of Iraq and from Muslim lands in general.  The head of the Chaldean Church in Jordan, Raymond Moussalli warned a recent Vatican meeting of the Middle East church leaders that jihadi Muslims are waging “a deliberate campaign to drive out the Christians from Iraq.  There are Satanic plans by extremist fundamentalists groups against Christians not only in Iraq, but in all the Middle East.”

Joseph Kassab, executive director of the Chaldean Federation of America says his organization is calling for the  international  community to intervene.  Former GOP Rep. Pete Hoekstra of Michigan said he believes the U.S. government’s response to the persecution of Christians in Iraq and thoughout the Middle East is half-hearted and embarrassing.  “I think it’s fine that Obama is trying to build bridges to the Muslim world.  But where is the same passion for protecting Christians and Jews in the Middle East.  It’s almost scandalous that America is not talking about this.”

There   is a very real pressure from Islamic extremists to cleanse Egypt just as they are trying to cleanse Iraq.  Iran is also attempting to cleanse any trace of Christianity from Iran.

The assault on Christians living in Muslim Nations has reached new levels as members of Egypt’s Coptic Church continue to be the target of increasingly violent attacks from Muslims.  Muslims looted and burned St. Mina’s Church and the Church of the Virgin Mary and attempted to burn St. Mary and St. Abanob Church.  Twelve Christians were reported to have been killed.   According to the Assyrian Internationa News Agency, approximate 3,000 Salafi Muslims participated in the attacks even as Egyptian troops and police did little or nothing to stop the violence.  Salafits are strongly influenced by the Wahabbi teachings that dominate the mindset of Al Qaeda.

As as the Obama backed Arab Spring protests reach Damascus, Syrian Christians are fearful of persecution as the Muslim Brotherhood try to seize power.   International Christian Concern (ICC) says that protesters are being led by hard line Islamists and that Christians have come under pressure to either join in protests demanding the resignation of Assad or leave the country.   Eye witnesses report seeing around 20 masked men on motorcycles open fire on a home in a Christian village outside Dara’s in southern Syria.   One Christian leader said that “If Muslims Salafis gain political influence, they will make sure that there will be no trace of Christianity in Syria.”

ICC spokesman Aidan Clay is urging Obama to take a cautious approach in his diplomatic relations with Syria.  “Throughout the middle east, Christians have been fleeing their homeland in unprecedented numbers.  Now, in a country where Christians have historically taken refuge from nearby purges in places like Turkey a century ago and Iraq in recent years, Islamists are threatening their existence.  We urge the U.S. government to act wisely and carefully when developing policies that have deep political ramifications for Syria’s minorities by not indirectly dupporting a foothold to be used by radical Islamists to carry out their anti-Christian agenda.”

Our government is backing these same so-called moderate Muslims.  How long before the violence hits America!