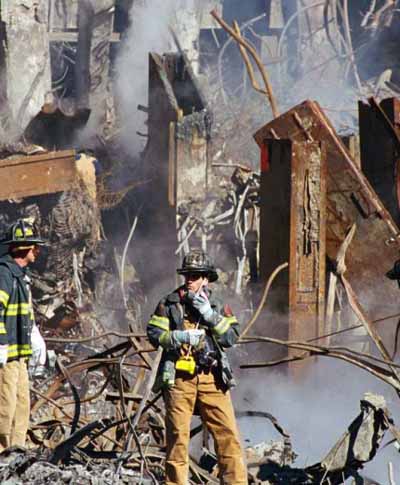 Instead of acting as a constant reminder of the attacks, this Memorial will completely wipe out the death and destruction 9/11 caused and the heroism and sacrifice in response to the attacks.

The Memorial will replace Ground Zero with two gigantic subterranean waterfalls designed to express exclusively, as per architect Michael Arad, the continuing “absence in our lives caused by these deaths.”   About 500 trees will be planted upon the site as “traditional symbols of the rejuvenation of life.”

What will be totally absent from the site is any segment of the twisted steel of the World Trade Center.  These were considered too gauche for the jury of intellectuals and artists who chose the design.

The WTC Sphere which stood in the center of the plaza for 30 years as a symbol of world peace will also be missing.

The Sphere now sits at Battery Park, about a half mile from Ground Zero where it was installed March 11, 2002 as a temporary memorial.  Battery Park is also undergoing renovations and the Sphere will be moved again but not back to Ground Zero.

Michael Arad said that the Sphere would be “didactic” – it would tell us what to think.

The Memorial will not include the initials FDNY, NYPD, or PAPD nor will it include the words firefighter or police officer.

Recognizing the heroism and sacrifice of these people would contrast those virtures with the barbarism and crime of the terrorists.

Bloomberg, who approved of the Ground Zero Mosque, will not allow the Rev. Mychal Judge, the FDNY chaplain who died while praying the Lord’s Prayer in the lobby of the WTC to be identified as “Fire Chaplain Father” Mychal Judge.

Traditional Judeo-Christian values will have no place at Ground Zero.

The photo of the three firefighters raising the flag at Ground Zero has also become iconic of 9/11 so it has to go.   It will not be depicted or recognized in any way.

“How do we commemorate the countless accumulated memories of the attacks” the 13 member Memorial jury asked  and then answered  – by eliminating all that we remember of the terrorists attacks.

One reason 9/11 succeeded was the scourge of political correctness – it dictated that our national security officials could not track or investigate Middle Eastern men in America despite their suspicious behavior.

The 9/11 Memorial is not, nor is it intended to be, a genuine and lasting commemoration of 9/11 – it is political correctness gone mad!

The PC police are so concerned  with protection of the minority over the majority Americans can not memoralize the sacrifices of those who died.   Freedom has become secondary.  This Memorial dishonors those that died and those loved ones left behind.

Bloomberg said in defense of plans to build a mosque near the site of Ground Zero “there is no middle ground when it come to religious liberty.”    Apparently that statement doesn’t apply to Christian values and traditions being displayed at the Politically Correct 9/11 Memorial.