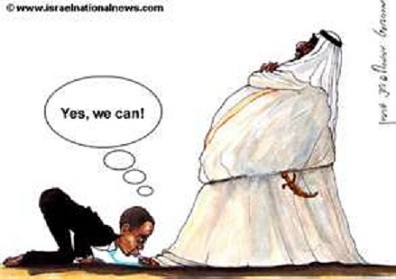 A Former FBI special agent in Washington says infiltration of the federal government by members of the radical Muslim Brotherhood is worse than some have recently warned, confirming that at least three operatives of the Egypt-based Brotherhood have penetrated the Obama administration.

The Egypt-based Brotherhood’s credo is “Jihad is our way and death in the cause of Allah is our dream.”

Canadian journalist, Tarek Fatah during a recent speech in Toronto warned, “When someone says that there is penetration of jihadi Islamists within society, do not dismiss it as some right-wing, xenophobic, racist rant. Today in the White House, there are three members of the Muslim Brotherhood that influence Obama’s policy. One is Rashad Hassan, who is the American ambassador to the 52-nation Organization of Islami (Conference).”

Fatah also named “Dalia Mogahed, who writes (Obama’s) speeches, who comes from the Muslim Brotherhood in Egypt; and another woman, an academic, (who) was appointed in that circle.”

Another former FBI special agent John Guandolo says Obama’s ties to agents for the Muslim Brotherhood are even more extensive. “The level of penetration in the last three administrations is deep. For this president, it even goes back to his campaign with Muslim Brotherhood folks working with him then.”

The Brotherhood also has placed several operatives and sympathizers within key positions in Homeland Security and the U.S. military, notes Guandolo, a former Marine Corps officer.

The veteran federal agent says such infiltration threatens national security, because the U.S. leadership of the international Brotherhood has outlined a secret plan to “destroy” the U.S. and other Western governments “from within,” and the FBI discovered the plan written in Arabic among documents seized from the basement of a prominent Brotherhood leader living in a Washington suburb after the 9/11 attacks.

Read the entire article at wnd.com.

Wonder why Obama want’s to legalize all the illegal immigrants?

Avi Lipkin, an expert political commentator on Middle East and Israli affairs, worked as an officer in the IDF for many years and served as a gov’t. spokeperson for the IDF as well.

Lipkin says Obama Plans to legalize 50 to 100 million Mid East Muslim Refugees. “The Muslim world is saying that President Obama wants amnesty for the 12 million illegal immigrants in the U.S. in order to pave the way for the next wave of mass immigration to the U.S.; tens of millioms of illegals from the middle east, leading to the possibility of a  whopping 50 to 100 million living in the U.S. before the end of his (Obama’s) second term in 2016, which will likely be brought forth by these new U.S. citizens voting for their saviour Obama.”

This is why Obama will not close our borders, and why through DOJ he has stopped deportation. He’s desperate for all the illegal votes he can get and not because he cares about them as people.

The Mexicans as well as black and white Americans are being used to further  Obama’s  agenda for the Muslims.

Lipkin has a source with a Senior U.N. official who also says, the U.S. will be a Muslim Country by the end of Obama’s second term.

In Obama’s book, The Audacity of Hope: Thoughts on Reclaiming the American Dream, Obama says, ¨I will stand with the Muslims should the political winds shift in an ugly direction.”

Neither Israel, or the U.S. are safe with Obama as president. How does this make you feel America?

← Crime Pays If You Work For The Government
N.Y.TIMES APPLAUDS SHARIA LAW →