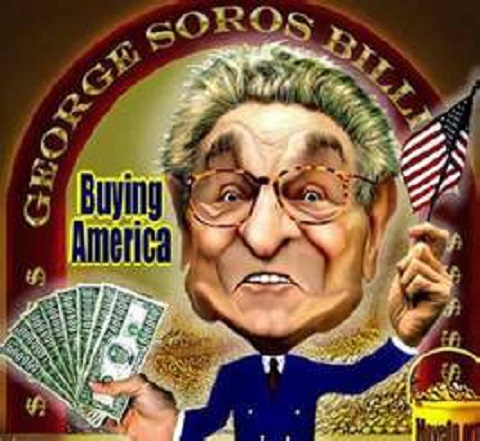 From American Survival, President Cliff Kincaid is leading a campaign to “Bring Back Beck” to Fox News. He produced several articles examining the role of Soros-funded groups in forcing Beck’s departure from the channel last year. What Kincaid has uncovered should chill the bones of every American.

The “Economic Terrorist” George Soros has the soul of Satan, with no boundaries to his wickedness, and without conscience; he plots and plans evil to inflict on his prey, whether it be man or country.

Kincaid learned that private investigator Douglas J. Hagmann, CEO of Hagmann Investigative Services, Inc., and director of the Northeast Intelligence Network, had information on why Glenn Beck left Fox News. Hagmann agreed to release the information to Kincaid as long as the identities of the sources of information were deleted.

Several sources had information about the events taking place at News Corporation in regards to Glenn Beck, and that staff members were heavily pressured to not report certain personal facts about Obama. However, Hagmann says the tip of the iceberg came when Beck began a series of programs on the “puppet Master” (George Soros) and the progressive’s movement backing Obama.

Hagmann told Kincaid, “One of my sources, beginning in the first part of 2011, told me that the corporate leadership of News Corporation (the parent company of Fox News) began to put pressure on Glenn Beck — and especially his support staff — about certain topics that were considered ‘off limits.’ This source stated that Beck was advised not to focus on George Soros, as there were certain fiduciary relationships he was not privy to between Soros and either News Corporation or one or more of their board members/corporate staff.”

“I was informed that News Corporation and/or Fox News Channel officers actually had a meeting with Soros representatives, during which company officials were advised to stop subjecting Soros to on-air scrutiny. This pressure eventually forced Beck off the air, as the Fox News Channel personality (Beck) became concerned about the physical safety and security of his own personnel.”

Hagmann added that his sources stated that it was Beck’s concern over the safety of certain staff members, the most vulnerable and exposed among them, who were being overtly intimidated. That one young woman, who became a primary source after being vetted and determined to be credible, was genuinely afraid, not only for her career but for her life and the life of her child. It was surreal, she told Hagmann, that she could be subjected to intimidation through surveillance and veiled threats because of her position to Glenn Beck. Hagmann added, it appeared Mr. Beck knew he could protect himself and his family, but not everyone involved in the program. “I strongly suspect, based on my professional experience as an investigator for the last 26 years, that Mr. Beck made a tremendous career sacrifice for the safety of others. That speaks volumes about Mr. Beck’s integrity, character and concern for others.”

Kincaid said that investigator Hagmann’s information, while non-specific at this point because of concerns over revealing the identities of sources, is extremely troubling, as it concerns the ability of the American people to get access to information of a critical nature.

Kincaid expresses that the background, and business dealings of George Soros, a convicted inside trader, are fair game, especially during a presidential campaign year, and that it is troubling that the one channel examining this matter would facilitate the dismissal of the one news personality willing to do so.

“If there were security concerns about Fox News personnel, additional protections for those employees should have been provided. News Corporation certainly has the resources to provide this kind of security. The reaction of News Corporation should have been to protect their employees, not to wash their hands of any involvement in the matter, forcing Beck to act for the good of his employees by leaving the company. As such, the episode smacks of capitulation to unlawful threats. If the threats were to continue under these circumstances, it should have been a matter for the public to know about, in order for the public to be made aware of the forces around George Soros acting on his behalf to intimidate the news media. This is an issue of major public importance. It is time for the facts to be made known. ”

Calling for an inquiry, Kincaid said, “In the same way that News Corporation and its chairman, Rupert Murdoch, have welcomed an investigation of the company in the telephone hacking scandal that erupted in Britain, in regard to the now-defunct News of the World property, we ask that Mr. Murdoch order an independent probe into the circumstances behind the ouster of Glenn Beck from the Fox News Channel. The results of such an inquiry, which should examine any meetings held between News Corporation/Fox News Channel and representatives of George Soros or Soros-funded groups, should be released to the public. Such a probe should expose and resolve any potential conflicts of interest between News Corporation board members and/or employees and Soros financial interests.”

Beck talks about $1 million “bounty on my head.”

← Obama Wants All Government Power
State Of The Union Address Has a Familiar Ring! →