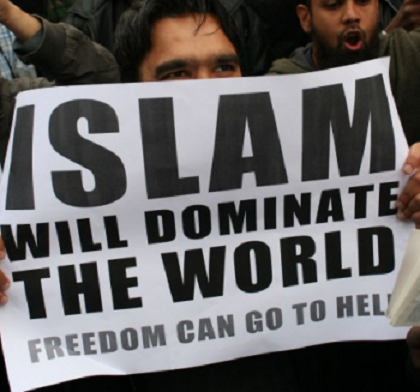 Perce was marching in a parade dressed as a zombie Muhammad proclaiming he was the Prophet Muhammad risen from the dead during the Mechanicsburg event which also featured a zombie Pope.  Elbayomy stormed out of the crowd and assaulted Perce, grabbing a sign around his neck and pulling until the strings choked him.

Mechanicsburg, PA, Police Officer Bryan Curtis made the comment, “Mr. Perce has the right to do what he did that evening, and the defendant in this case was wrong in what he did in confronting him. I believe that I brought a case that showed proof beyond a reasonable doubt, and the case was dismissed, and I was disappointed.”

Muslim judge Martin not only dismissed the case, but lectured Perce, giving his own interpretation of the 1st Amendment, calling Perce a doofus and accused him of using it to madden Muslims and offend Islam.

Judge Martin went as far as to bring a Quran to court telling Perce, “I think you misinterpreted a couple of things. So before you start mocking somebody else’s religion, you might want to find out a little more about it. I think our forefathers intended to use the First Amendment so we can speak with our mind, not to p— off other people and cultures – which is what you did.”

I personally have a problem with this judge.

Because the judge dismissed this case, Muslims will now believe they can do whatever they want, claiming you offended their god Allah, yet, Christians are arrested for praying in public. Judge Martin should be removed from the bench.

This is why I strongly believe all judges should be elected to office for no more than a 2 year term instead of being appointed.

When reading the following excerpt of the Muslim judge’s lecture in which he scolded Perce for offending Islam, pay close attention to his words:

Well, having had the benefit of having spent over two-and-a-half years in predominantly Muslim countries, I think I know a little bit about the faith of Islam. In fact, I have a copy of the Quran here, and I would challenge you, Sir, to show me where it says in the Quran that Muhammad arose and walked among the dead. I think you misinterpreted a couple of things. So before you start mocking somebody else’s religion, you might want to find out a little more about it. It kind of makes you look like a doofus. …[Muslims mock Christianity.]

I don’t think you’re aware, Sir, there’s a big difference between how Americans practice Christianity – I understand you’re an atheist – but see Islam is not just a religion. It’s their culture, their culture, their very essence, their very being. They pray five times a day toward Mecca. To be a good Muslim before you die, you have to make a pilgrimage to Mecca, unless you’re otherwise told you cannot because you’re too ill, too elderly, whatever, but you must make the attempt. Their greeting is ‘Salam alaikum, wa-laikum as-Salam,’ uh, ‘May God be with you.’ [Is he insinuating Christianity is not a Christians way of life or that Christians don’t pray, or Christians are second class citizens? ]

Whenever it is very common, their language, when they’re speaking to each other, it’s very common for them to say, uh, Allah willing, this will happen. It’s, they’re so immersed in it. And what you’ve done is, you’ve completely trashed their essence, their being. They find it very, very, very offensive. I’m a Muslim. I find it offensive. I find what’s on the other side of this [sign] very offensive. (Editor’s note: Reverse of sign said, “Only Muhammad can rape America!) But you have that right, but you are way outside your bounds of First Amendment rights. … [NO he wasn’t. Freedom of speech means freedom of speech.]

I’ve spent about seven years living in other countries. When we go to other countries, it’s not uncommon for people to refer to us as ‘ugly Americans.’ This is why we hear it referred to as ‘ugly Americans,’ because we’re so concerned about our own rights, we don’t care about other people’s rights. As long as we get our say, but we don’t care about the other people’s say.

The judge later added, “Because there was not, it is not proven to me beyond a reasonable doubt that this defendant is guilty of harassment, therefore, I am going to dismiss the charge.” [The police officer was a witness.]

The Scranton Atheism Examiner reports that Perce could be arrested for posting audio of the judge scolding him for mocking Muhammad. According to report, the Muslim judge has threatened to hold him in contempt of court for releasing the recording, although Perce has claimed he was given permission to post the audio.

The Examiner reports that Perce said he posted the audio because the judge treated him unfairly and showed preferential treatment for the Muslim defendant.

Audio of the judge Martin scolding Perce starts at 28:30 on the fiollowing video.