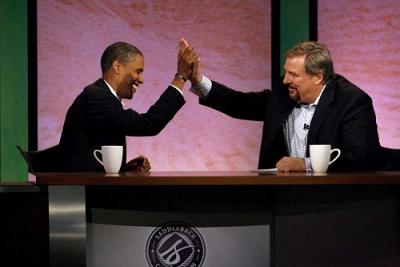 PBS ran a documentary on the practice of Chrislam in Nigeria in 2009. Fred De Sam Lazaro said that Pastor Shamsuddin Saka has at least 1,500 practitioners of Chrislam that see no fault line between Islam and Christianity.

In Nigeria half of the population are Muslim and the other half profess some form of Christianity.  Tensions between the two have often erupted.  In November 2008 more than 300 people were killed in the town of Jos.  Pastor Saka is attempting to bridge the gulf between the two dominate religions.

Saka was born Muslim but after returning from a pilgrimage to Mecca he said that God instructed him to launch  his new ministry. He tells his congregation that all are children of Abraham through Judeo-Christian traditions as well as  through Islam.   The Bible teaches that you must love your neighbor and even your enemy and the Quran teaches the same thing.   Islam too is a religion of peace, of love and miracles.  Read a comparison of  the basic tenants of Islam and Christianity here.

Dr. Mora Leichtman, Assistant Professor of the Department of Anthropology at Michigan State University says that according to Islam, Muhammad was the final prophet but certainly not the only.  They [people in some African countries] believe in Jesus and all other prophets of Judaism and Christianity that came before Muhammad.  It’s nothing for them to pray to Jesus or some other prophet, or to light a candle for the Virgin Mary.  They believe what I call “spirituality without boundaries.”  It is easy to see that the Muslims in some African countries have interpreted and adopted both Christianity and Islam to their local needs and customs.

The Chrislam website is an Islamic Christian National Dialogue Committee in Lebanon.  You can read their working paper here.  I was unable to find any website touting Chrislam in America.  I have, however, found many blogs accusing numerous ministers and denominations of attempting to institute Chrislam in America.

The best known Pastor, Rick Warren,  a Liberal Theologist, of Saddleback Church, in Lake Forest, California, has been accused on numerous websites.    Warren is a member of the Council on Foreign Relations (CFR) of which many prominent political names have been linked, including Bill Clinton, John McCain, and  numerous ideologists of the Obama administration.  CFR has been long linked to pushing for a one world government.   You can check out CFR membership here.

According to one article, Warren has launched a new program he calls “King’s Way,” the purpose of which is to promote peace and unity between Muslims and Christians. As part of their effort to promote their mutual goals, Warren’s pastoral staff and local Muslim leaders have coauthored a document outlining the points of agreement between Muslims and Christians and their mutual goals of  making friends with one another, building peace and working on shared social service projects.   Both groups have agreed not to evangelize each other.  I am sure the article was referring to “A Common Word” as I could find no other document to fit the description.

Warren praised  religious freedoms in Syria in a  2006 trip, although he later denied making the statements. He began featuring occultic “New Agers” in his Church in January of last year.  He participated in and endorsed “A Common Word Between Us & You”.   He hosted the Global Peace Forum with special guest New Ager Prime Minister Tony Blair.  Rick Warren is on the Board of Blair’s Interfaith Foundation.

Warren is calling his affiliation with Chrislam, as some have dubbed it, “nonsense” and “a lie that won’t die.”  “The so-called Chrislam rumor is 100% false.  If the guy who started this libelous myth, or anyone else who passed it on, had obeyed our Lord’s command (Matt. 18:18-20) to come directly to me, and then asked what I actually believed, they would have been embarrassed to learn that I believe the exact opposite.  As a fourth generation Christian pastor, my life and ministry is built on the truth that Jesus is the only way, and our inerrant Bible is our only true authority. . .You cannot win your enemies to Christ; only your friends, so we must build bridges of friendship and love to those who believe differently so Jesus can walk across that bridge into their hearts.”

The Christian Coalition of America published a blog in January accusing the Presbyterians of pushing the new Chrislam religion.  “The Off-base Emerging Church is encouraging pastors to embrace an ecumenical concept of combing Christianity and Islam, actually  partnering with Islam, to launch a new religion called Chrislam. . .Brian McLaren, the leader in that Emerging Church movement wrote on his five-part blog entry when Christians should join with Muslims in the Ramadan fast.  As to be expected, another leader in that Emerging Church movement is Dr. Tony Campolo who says he is not convinced that Jesus lives only in Christians.  In his view, an Islamic “brother” who has fed the hungry and clothed the naked clearly has a personal relationship with Christ, only he doesn’t know it.”

Campolo holds to the Kingdom Now theology which places the Biblical promise for a future earthly kingdom in this life.  You can read more of his faith here.  Brian McLaren, author of “A New Kind of Christianity” pushes for a new kind of Christian faith.  It is easy to see that either or both of these men would accept blurring the line between Islamic beliefs with that of Christianity.

Basically, that is where the problem lies.  God  warned the Hebrews to steer clear of the heathen nations and when they did not follow his warning, they  found themselves adopting pagan beliefs and worship.  It is one thing to show respect for others and their beliefs but quite another to bring them into God’s house on equal terms.

While I could not find any direct evidence that Chrislam is rampant in America, there is evidence that a large number of Christian Churches, including Pastor Warrens,  have wandered off the true Biblical path into a dangerous world of man made traditions and worship.

But I know you, that ye have not the love of God in you.  I am come in my Father’s name and ye receive me not: if another shall come in his own name, him ye will receive.  How can you believe, which receive honour one of another, and seek not the honour that cometh from God only?      John 15:42-44