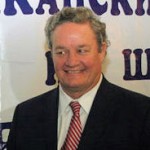 In the weekly Republican address, North Dakota Gov. Jack Dalrymple (R) called on Congress to quicklypass legislation to green-light the Keystone XL oil pipeline. Dalrymple urged Congress to pass a measure authored by Sen. John Hoeven (R-N.D.) that would fast-track construction of the pipeline because the Obama administration is “killing energy development.”

Dalrymple boasts on how the economy is booming in his state thanks to sound energy and economic policies, in contrast to the policies of the president.

North Dekota is booming with an unemployment rate at 3.3%.  Average job pay for citizens is $45,000 per year, and average pay for working in the oil producing industry is $83,000.

Devils Lake mayor Dick Johnson said that when companies bring jobs to town, the benefits are greater than just a tax break. “The environment is there to do that type of thing through various incentive programs, and it’s just a good, positive place to work.”

Much of the growth comes from the oil patch, but other areas closer are experiencing a boom of their own with the latest statistics showing Ramsey County’s employment growth rate at 5.3 percent.

Governor Dalrymple has the right idea on how to incourage job growth, and has proven it works!

The entire U.S. could be at work if Obama would lift all his job killing regulations, stop trying to control the states, and stop trying to force his policies and Socialism down our throats.

Anyone with common sense would not want America to be a Socialist/Communist country, and if everyone would use the grey matter God gave them, taking time to understand where our country is headed under Obama’s direction, they would know  why we have the Constitution and the Bill of Rights.

Think you have it hard now, just wait until Obama finishes executing his plans for America.

Look at Cuba, there’s a perfect example of a Socialist/Communist government that controls  businesses and everything in people’s lives. Don’t believe me, then move there. See how much better off you are earning $17.00 a month.