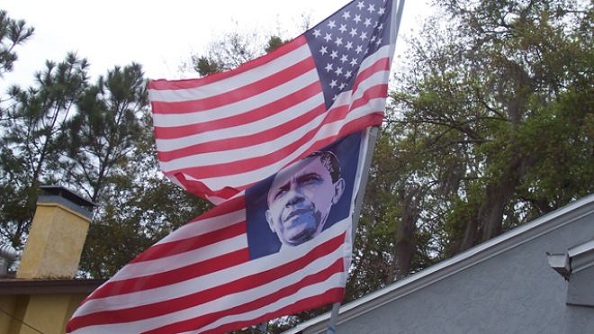 Orlandosentinel – A flag depicting an image of Obama was taken down from Lake County Democrat Party headquarters today after several veterans complained it was a “desecration.”

Half a dozen veterans organized a protest at the Democrat party headquarters telling Hurlbert that the Obama flag was in violation of federal flag code, and ask that it be removed and stated they would be glad to take it down.  Don Van Beck, executive director of the Veterans Memorial then offered a POW/MIA flag to fly instead.

Nancy Hurlbert ended the confrontation when she remove the the flying flag which occupied the same flagpole as the American flag, stating she was suprised. “No one had called us. We have a phone.”

Former Marine John Masterjohn said, “It’s a cult of personality to show his face, like Stalin or Mao. It’s despicable. They don’t know how sick they are.”

Hurlbert stated,”We’re proud of our president and we didn’t realize it was in violation. I am the chair and I take responsibility for this.”

Believing the flag would not fall under ‘freedom of speech’, Van Beck said,  “I’m sorry it had to come to this but you do not desecrate the American flag.”