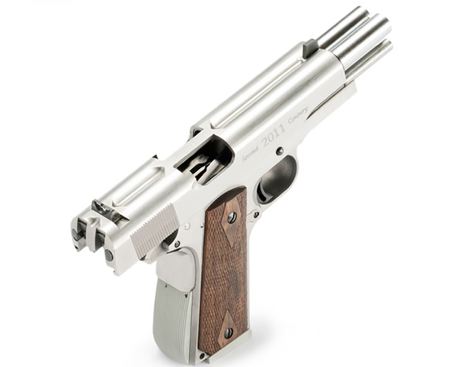 “To commemorate the legendary Colt 1911-A1 in the Centenary by making a true industrial market-ready double barrel .45 caliber pistol. We achieved success in the brief span of 6 months, after intense and round-the-clock 3D designing, stereolithographic modeling and parts machining.”

The AF 2011 is the first time two pistols have been welded into one in a design that is shelf-ready and meant for sale.

“The gun can be handled by any shooter… [and] holds amazing and surprising target performance for the shooter: in fact, it will group all the 8 double .45 caliber rounds (16 bullets) held in the duplex, single columns magazines, in a target of the size of an orange at 15 yards and of a water melon at 25.”

“The AF2011-A1 can be ordered either with 2 independent triggers and one sear group (left or right, with user-interchangeability for right or left operations) or with 2 triggers permanently joined and the choice of 1 or 2 sear groups. The AF2011-A1 is available in mirror finish Deep Blue or with a 3400 Vickers surface hardness White Ash Nitrite coating.”

“It will knock down a bull.”