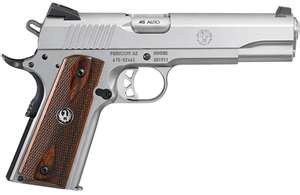 The Company will announce its results and file its Quarterly Report on Form 10-Q for the first quarter of 2012 on Tuesday, May 1, 2012, after the close of the stock market.

According to the National Shooting Sports Foundation, 10.8 million firearms were sold in 2011, an increase of over 50% from the previous ten years.

Everyone from the NRA to the Tea Party is warning that should President Obama be re-elected, we will likely see a major assault on the Second Amendment . They argue that with Obama’s need to be re-elected gone, there will be nothing stopping him from going after your Second Amendment Rights.

“President Obama will move to “destroy” gun rights and “erase” the Second Amendment if he is re-elected in November.”

NRA Executive Vice President Wayne LaPierre said the president’s low-key approach to gun rights during his first term was “a “conspiracy to ensure re-election by lulling gun owners to sleep.”

“All that first term, lip service to gun owners is just part of a massive Obama conspiracy to deceive voters and hide his true intentions to destroy the Second Amendment during his second term.”

“We see the president’s strategy crystal clear: Get re-elected and, with no more elections to worry about, get busy dismantling and destroying our firearms’ freedom, erase the Second Amendment from the Bill of Rights and excise it from the U.S. Constitution.”

← Would You Comply With A Law That Says You Can’t Feed The Hungry?
Hilarious Danish video commentary mocking Obama →