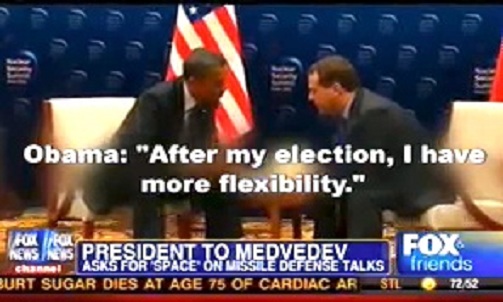 Obama: “This is my last election. After my election I have more flexibility.”

Medvedev: “I will translate this information to Vladimir and I will stand with you.”

Obama & Medvedev have directed their technical experts to see what they could do to work things out.

Is THIS the ‘flexibility’ Obama promised Russia on nukes?

Last year, Obama committed to reducing stocks of U.S. weapons-grade plutonium and signed an agreement that will lower the country’s deployed nuclear arsenals.

Obama’s “science czar,” John Holdren, long petitioned for the moves in a magazine whose personnel were used for the benefit of Soviet propaganda in an attempt to disarm America, according to a former top intelligence official during the Soviet era.