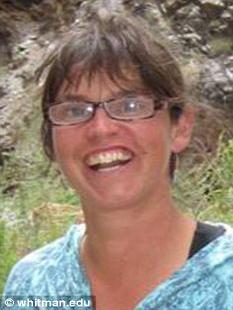 Kari Norgaard, a professor of sociology and environmental studies at the University of  Oregon  is  calling “climate Change skepticism”  a sickness  which  must be treated as an aberrant sociological behavior.  She thinks (?) that resolving skepticism about climate change is a challenge equitable to racism or slavery in the south.    Her parents must be so proud!

Apparently Kari and her extremist environmental buddies neglected  to read the latest study by Dr. Zunli Lu, a geochemist  from Syracuse University in New York before heading off to their PUP conference.

The UN IPCC has argued for years that the Medieval warm period some 500-1,000 years ago was confined only to Europe  which would make worldwide warming a man-made phenomenon.  Dr. Lu burst their little bubble.  He and a team of scientists found that the Midieval  period warming extended all the way down to Antarctica – it affected the entire planet.  Following that period of warming, the earth cooled,  just like it had warmed – all on its own – without  assistance from the UN or the EPA.

These elistist academics who want to force us to change to suit their distorted utopian world have created a new science  – the  “science of communicating science”  – reminiscent of Isaac Asimov’s science-fiction “Psychohistory” discipline, able to predict and alter the behaviour of large populations, as a means to achieve their agenda.

“recent advisers in behaviour and decision science also tells us that emotion is an integral part of thinking, perceptions and behaviours, and can be essential for making well judged decisions. . .Emotion creates the abiding commitments needed to sustain action on difficult problems such as climate change. . .framed emotional appeals can motivate action, given the right supporting conditions, in particular a sense of personal vulnerability, control and support of others. . .”

The Planet Under Pressure  conference, cosponsored with taxpayer funds by NASA and the U.N. Environment Program (UNEP), consists of  the same old  “the sky is falling”  scientists, environmental groups, activists, and the United Nations,  as a lead up to the RIO+20 UN Summit.

This “elitist” conference is nothing short of a forum for neo-eugenicists to hone their population control agenda, and find a way to micro-manage the human race.    Check out the video to see what they have in store for you.

According to Karen Seto,   associate professor of Urban Environment at Yale  “We certainly don’t want them [humans] strolling about the entire countryside.  We want them to save land for nature by living closely [together]”   Seto is co-chair of the Urbanization and Global Environmental Change Project (UGEC) of the International Human Dimensions Program on Global Environmental Change (IHDP) and a coordinating lead author for the Working Group III of the IPCC that wrote the 5th assessment report.

Several scientists at the conference made a call for denser cities, insisting that the world’s population needs to be locked up within the confounds of mega cities.  These so-called “elite” realize that if the “herd” is to be properly controlled – the cities will need to be walled – thick walls – sort of like the ghettos they herded the  Jews into before sending them to a concentration camp.

Skepticism of man-made climate change is at an all time high.   Those who are set to make billions off this scam and the dishonest scientists willing to prostitute themselves,  have lost the debate but, rather than admit it, they want to re-brand anyone who dares think for themselves as racist and mentally ill.   If threats and intimidation  doesn’t work,  that’s okay, they will just brainwash the masses into compliance.