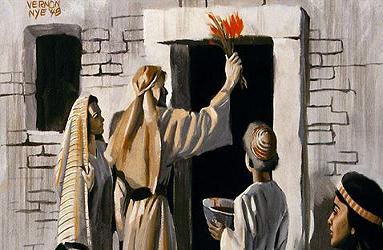 Rewriting the history of Israel is nothing new to the Palestinians.  It is an attempt to deny Israel’s existence, erase  Jewish history and invent ancient Palestine, Muslim and Arab histories in the land.   Dr. Yussuf Alzamili, Chairman of the History Department at Khan Yunis Education College, called on universities and colleges to “write the history of Palestine and to guard it, and not to enable the foreign implants and enemies to distort it or legitimize the existence of Jews in this land.”

Dr. Omar Ja’ara, a Palestinian university lecturer,  is doing  his best at reinventing history.  In the video below he has radically altered the Biblical story of Moses, Joshua and David to suit the Palestinian agenda.

“We must make clear to the world that David, in the Bible, is not connected to David in the Quaran, Solomon in the Hebrew Bible is not connected to Solomon in the Quaran, and neither is Saul or Joshua.  We have a great leader, Saul, who defeated the nation of giants and killed Goliath.  This is a great Muslim victory.  The Muslims of the children of Israel went out of Egypt under the leadership of Moses the Muslim, the believing leader, the great Muslim who was succeeded by Saul, the leader of these Muslims in liberating Palestine. . .This is our logic, this is our culture.”

The new Palestinian history also states that Palestinians, Muslims, and Arabs populated the land of Israel in Biblical times and even earlier.   This so-called documentary  that aired many times on Palestinian television is just one  example of the newly created history.

In another attempt to represent Israel as foreign colonial occupiers, the Palestinian Authority put out this video.

I guess you have to give them credit for inventiveness.

This created history may bode well for indoctrinating the children of Palestine and give the far left Anti-Semitics in this country a lie to cling to but the truth is, the name of Palestine as a replacement for Judea/Israel was coined  around 131 A.D. by Rome.    Islam wasn’t established until 631 A.D.  The Arabs arrived in the land of Israel with the Muslim invasion in 637 A.D.

You can’t hide the truth forever.  It wasn’t that long ago that Fathi Hamad, the political leader of Hamas, admitted that the Palestinian people were transplants from Egypt and Saudi Arabia.  Of course that truth will not prevail against the far-left Anti-Semitics who will continue to propagate the lies.

Rewriting Biblical history to fit an agenda is also spread by the Nation of Islam in America.  Elijah Muhammad who led the National of Islam until his death in 1975 once said that the world did not begin with Adam.  Adam was only the first white man created by a black man, Yacub (Jacob).  Apparently the story in the Bible where Jacob was able to breed flocks of  speckled sheep and goats is the story of the birth of the white race from black parents.