Peoplescube – Our friends at PeoplesGenealogy.com, in cooperation with the current interim provisional government of Kenya and Hawaii, have published their research of Barack Obama’s ancestry, starting with the oldest forebear they were able to verify.

King Putt – pharaoh of ancient Egypt during the Sorosian dynasty. He saved his country’s economy by spending all of his subjects’ money on building a huge pyramid, which housed an indoor golf course.

Emperor Nerobama – set fire to Rome, fiddled while it burned, and blamed it all on the Christians and their “war on women.” 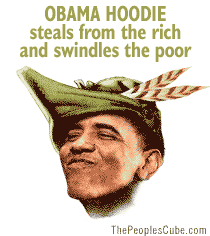 Robin Hoodie – popular leader of Occupy Sherwood Forest. After a successful career of stealing from the rich and giving to the poor, he and his wife, Maiden Michelle, retired to a large castle, which they purchased along with about one third of France.

Sir Issac Nobama – after being struck in the head by an ACORN that fell from a tree, he formualted the Theory of Grave Voting, known today as the Chicago Way.

When his father asked him who did it, he replied, “I cannot tell a lie… Georgie Bush did it!”

James Monrobama – Statesman who created the Monrobama Doctrine, which stated that any act of agression that occured in the Western Hemisphere would be the U.S.’s fault.

Andrew Johnsobama – Even though he was hundreds of miles away taking a nap at the time, this pol claimed he was leading the patrol that cornered and killed Lincoln assassin John Wilkes Booth.

Thomas Alva Obama – Man who said “Genius is 99% government mandated.” Thomas Alva Obama mocked Edison’s incandescent bulb as being inferior to his own “solar-powered light,” which was really just a pane of glass. 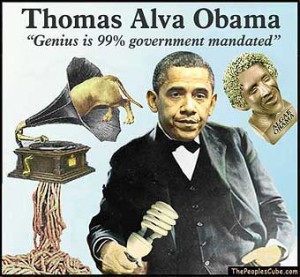 Albert Obamastein – Developer of Quantum Race Theory, which posits that if a tree falls in the forest and no one hears it, it’s still the white guy’s fault.

Neville Obamalain – British diplomat who suggested holding a beer summit in response to Hitler’s demand that Czechoslavakia cede to Germany the Sudetenland in a ‘land for peace deal.”

Gen. George Pattobama – American general who, during WWII’s Battle of the Bulge, slapped an American soldier for burning a copy of Mein Kampf.

Ambassador Adlai Obama – At a critical point in the 1962 Cuban Missile Crisis, he told President Kennedy that the United States “deserved to be blown up.”

Ronald Raybama – politician who coined the phrase “Mourning in America.”

← Iran Warns – War Against U.S. Inevitable
Someone Please, Buy Obama a Dictionary, then find a 5 year old to explain it to him →