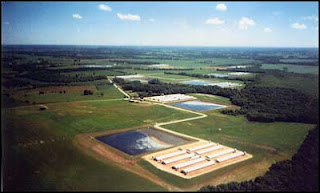 During the summer season, the EPA conducts aerial survelliance of the near coastal marine waters of the Mid-Atlantic, from the Delaware River off New Jersey, south to the Virginia/North Carolina border, supposedly too record slightings of dolphins, turtles, whales, boats, beach use, and “other activities of interest.”   It is that “other activities of interest” that worries me.

It has also come to light that the EPA is using aerial survelliance in the  Midwestern Concentrated Animal Feeding Operations (CAFOs) over Nebraska, Iowa, Missouri and Kansas.  Of course the EPA defends the use of “fly overs” as cost effective but since the EPA delegated to the states the right to  CAFO inspections and the right to enforce the Clean Water Act, there is no need for the EPA to inspect every CAFO, by air, by ground or otherwise.  An EPA spokesman said that it was “well established that there is no expectation of privacy from the air.”

Senators Mike Johanns and Ben Nelson, along with Representatives Jeff Fortenberry, Adrian Smith and Lee Terry, sent a letter to the EPA on the 29th regarding their use of aerial survelliance of regulated livestock operations in Nebraska.   “As you might imagion, this practice has resulted in privacy concerns among our constitutents and rasies several questions for us.”

The letter asks the EPA:

It also came to light during a hearing at the House Committee on Oversight and Government Reform on the EPA’s war on coal that in West Virginia, the EPA is using aerial surveillance of family farms with the goal of ensuring compliance with the Clean Water Act.  According to Representative Shelly Moore Capito,  the EPA is going as far as regulating the type of sheds that family farmers can build for their cattle operations.

Given the EPA’s recent track record of aggressive and over-reaching regulations, these survelliance flights raise serious questions.   What else are they using aerial survelliance for?

Aerial surveillance violates privacy.  While the Constitution does not contain an express “Right of Privacy”, the Supreme Court has interpeted in numerous rulings that the 4th Amendment protects one’s home from unreasonable government surveilliance.

← Obama and The U.N. Gunning for Our Second Amendment Rights
Obama: An Idol, The Chosen One or The Candidate of Fear? →