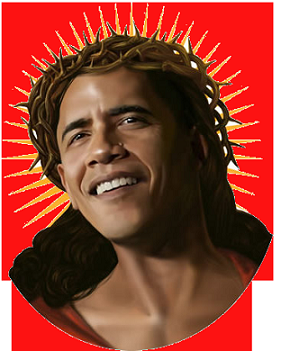 Ed Rogers, in an op-ed piece for the Washington Post, says it is time for Democrats to decide if Obama is an idol or a president.  “The left has a decision to make: is it going to try to repackage the starry-eyed romance and dreamy magic of Barack Obama from four years ago or build a rationale for his re-election based on lessons learned and a plausible critique of the president’s performance in office.”

Frank Bruni of the NY Times suggests that the left is going to double down on the theme of Obama as the chosen one and his followers as enlightened, while  John Heilemann suggests that Obama is poised to become the 2012 candidate of fear.

Michael J. Hurd, writing for Capitalism Magazine says that Democrats expect us to accept that  the main reason for re-electing Obama is to not return to the policies of George W. Bush, presupposing that Bush’s policies were dramatically different from Obama’s.

George W. Bush increased government regulation.  He manipulated the mortgage and banking industries and provided huge subsidies for them when his government interventions failed.  He worked to keep income taxes at a level higher than the Reagan era but lower than the Clinton era.  He expanded the role of government in medical care by introducing the Medicare prescription drug program.  He sent soldiers overseas to fight in wars without any specific purpose, for which no clear definition of victory was ever provided.  Bush expanded domestic spending, especially for education and social services.  Under his watch the deficit and the national debt expanded significantly, at historically high levels.

Barack Obama increased government regulation.  He supported legislation to manipulate the mortgage and banking industries.  He also supported manipulation of the auto industry through subsidies and buyouts.  He kept income taxes at a level higher than the Reagan era but lower than the Clinton era.  He expanded the role of government in medical care by fighting for the passage of ObamaCare, which extends Medicaid and Medicare to most of the population.  He sends soldiers overseas to fight in wars without any specific purpose, for which no definition of victory is ever provided.  Obama expanded domestic spending, especially for education and social services.  Under his watch the deficit and the national debt expanded significantly, more than ever in history.

For many decades the Democratic Party has set the agenda.  We have had Republican and Democratic Presidents and each party has controlled Congress at different times.  But the initiatives are always those of the Democrats: increased domestic spending, increased regulation of the private economy, and increased taxation.  For a brief interlude in the 1980s, Ronald Reagan took partial control of the agenda but only on the issue of taxes.  Beyond that, it has been a Big Government, socialistic run for the better part of a century.

In principle, Bush’s and Obama’s record are no different.  If Bush’s policies were so bad, then why should Obama’s policies, based on the same exact principles of Big Government,  have promised any better results?  Things have not improved, and in many respects, such as higher unemployment, under Obama they are even worse.

The full impact of Obama’s biggest accomplishment – socialized medicine, has yet to hit home because he didn’t allow it to go into effect until the first year of his second term.  The same applies to tax increases.  What does that say about Obama’s confidence in his own policies?

In “Voter Apathy Reflects Systemic Problems”,  Derek Scarlino presents a disturbing picture of American voters.  While I do not agree entirely with his assessment of the situation,  he  presents a realistic picture of voters who are turned off by politics and sold a bill of goods by politicians.

Voters can no longer depend solely upon party labels because the choice is no longer between Democrats and Republicans  —  It is between Constitutionalism and Socialism.  Our only hope to save America is to elect and strengthen the ranks of those who believe in and support the restoration of Constitutional principles and for that to happen, you need to educate yourself and vote responsibly!