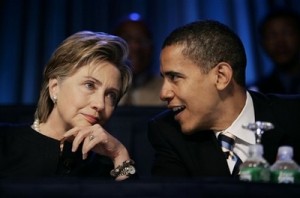 Is the Obama administration secretly negotiating treaties with globalist bodies, in violation of the Constitution? That’s the question on the minds of a number of political watchdogs, who argue that the White House is doing an end run around Congress and the American people in order to lock the country into agreements on the environment, fishing rights and even gun ownership with the United Nations (UN).

On Feb. 7, former Bill Clinton campaign manager Dick Morris dissected a host of international “sneaky treaties” that, he says, “Once signed and ratified, have the same status as constitutional law and cannot be altered or eclipsed by Congress or state legislatures. And their provisions must be enforced by U.S. courts.”

The most egregious of these would be U.S. membership in the International Criminal Court (ICC). This tribunal that has jurisdiction across the globe could prosecute elected U.S. leaders for entering into a war without UN approval. These “crimes of aggression”—even if approved by Congress under an official declaration of war—could still land the president or cabinet members in prison. The ICC’s reach supersedes the rulings of any U.S. court, thereby posing a serious threat to constitutionally-guaranteed trials by a jury of our peers.

A lesser-known aspect of this treaty involves, ironically, the use of America’s military to wage aggressions against those deemed war criminals by the ICC.

Already, Barack Obama has buckled to this ruling body by sending armed forces into Africa to execute an arrest warrant for alleged war criminal Joseph Kony, leader of the Lord’s Resistance Army in Uganda.

Yet rather than having Congress authorize sending U.S. men and women into action overseas, Obama bypassed them and opted to exert his “executive power.” He justified this decision as an “international obligation.” Who is our president obligated to: American citizens or the New World Order?

Another treaty, one advocating children’s rights, would—at least superficially—protect youths from kidnapping, prostitution and human trafficking. However, if a 14-member panel determines that certain countries like the U.S. aren’t providing enough funding for food, education or clothing to underdeveloped nations, the UN could levy a tax on American citizens and then redistribute this money to Third World countries.

Not surprisingly, a leading proponent for the UN Convention on the Rights of the Child (UNCRC) is Hillary Clinton. In her book It Takes a Village, she wrote: “The village must act in the place of parents. It accepts these responsibilities in all our names through the authority we vest in the government.”

These 14-member overlords could also weigh in on what religious teachings, educational material and social attitudes are acceptable. Interestingly, Hillary’s views on child-rearing dovetail with those of the UNCRC. “They [parents] have to be shown how to do it,” wrote Hillary. “They have to be, in a sense, re-parented to be able to be a good parent.”

Hillary is so distrustful of traditional families that she further elaborated.: “Decisions about motherhood and abortion, schooling, cosmetic surgery, treatment of venereal diseases or employment and others where the decision—or lack of one—will significantly reflect the child’s future should not be made unilaterally by the parent.”

If these social-engineering thoughts aren’t horrifying enough, Hillary remarked at the University of Texas in 1993, “Let us be willing to remold society by redefining what it means to be a human being in the 20th century, moving into the new millennium.”

A third troublesome treaty is known as the Law of the Sea Treaty, or LOST. Over 162 nations have signed or ratified it. Many other nations, such as Turkey and Israel, have stayed out of it. Today, America is not on board, but this situation may change if Obama sidesteps the Constitution yet again via executive order.

LOST is being promoted by another Clinton crony, Defense Secretary Leon Panetta, who seeks to surrender seas off the coasts of the United States to UN overseers. Although the complexities of this treaty are far too vast to elaborate on here, in a nutshell LOST will acquiesce to a UN council where U.S. companies can drill for oil or fish and which technologies must become global property via a form of intellectual eminent domain. The UN could tax up to 50% of royalties from offshore drilling and redistribute these proceeds to poorer nations.

In another example, the Outer Space Code of Conduct could seriously interfere with the U.S. implementing any type of anti-missile shield to protect itself. Using the feel-good premise of decreasing space debris, in actuality this treaty would jeopardize the U.S. military’s ability to deploy platform-based weapons in space.

When it comes to China and India’s rapid development of their space programs and offensive weaponry, are Americans willing to forfeit their safety to the edicts of UN bureaucrats that already view us with such outright enmity?

In early April, Sen. Rand Paul issued a statement on this: “Secretary of State Hillary Clinton recently announced the Obama administration will be working hand in glove with the United Nations to pass a new ‘UN Small Arms Treaty.’ ”

The UN Small Arms Treaty is designed to “register, ban and confiscate firearms owned by private citizens like you,” wrote Paul.

If Washington signs onto this, added Paul, the U.S. would be forced to “enact tougher licensing requirements . . . confiscate and destroy all ‘unauthorized’ civilian firearms . . . ban the trade, sale and private ownership of semiautomatic weapons . . .[and] create an international gun registry.”

During a May 10 interview with AMERICAN FREE PRESS, Becky Fenger, a political columnist for Arizona’s Sonoran News, voiced her concerns to this writer in regard to a rash of globalist treaties being negotiated by the current administration.

“What are Hillary Clinton and Barack Obama thinking?” asked Mrs. Fenger. “I can’t understand why they would willingly hand over power to the UN. How can you reason with these people when it seems like they’ve lost their minds?”

← Do I Get Benefits If I Marry My Dog?
More Feel Good Legislation To Placate the Peasants →

7 comments for “Selling Out the U.S. in Secret”