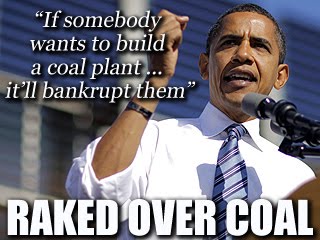 UPDATE:  The Senate is set to vote on Inhofe’s Senate Joint Resolution 37 on Wednesday the 20th.  If you have not contacted your Senator to demand they support this resolution NOW would be the time.

Millions of Virginia families and businesses could see a dramatic increase in their electric bills and hundreds of workers could be at risk of losing their jobs if the new EPA Utility MACT Rule is allowed to take effect this year.

Senator James Inhofe  introduced Senate Joint Resolution 37 to nullify Utility MACT and plans to force a vote in the Senate this month.  This may be one of the last meaningful Senate votes before the fall elections and is a key opportunity to put Senators on record as to whether or not they support those that put them in office or Obama’s agenda to destroy the coal industry.

The EPA Rule regulating mercury and other power plant emissions will increase Virginia’s electric rates by as much as 24% and could force half of Virginia’s coal fired power plants to close,  leaving hundreds of workers without a job.  In addition, the “Rule” would make it next to impossible to build new coal fired plants in the U.S.,  costing states job opportunities and economic development.

Contrary to  environmental activists’ claims, coal fired plants are only responsible for about one-half  of one percent (.5%) of the emissions regulated by Utility MACT.  Coal plants produce about the same amount of covered emissions as forest fires and less than 10% of the emissions generated by China’s coal plants, which will still be in operation.  To put this in perspective, if we closed all coal fired power plants in the U.S., as the EPA is attempting to do, we would not even make a dent in 99.5% of the mercury in the air we breathe today.

Please tell your Senators to stand up for hard working families and businesses and support Senate JR 37.   We can’t afford to lose more jobs and our families and small businesses can not afford higher electric rates.