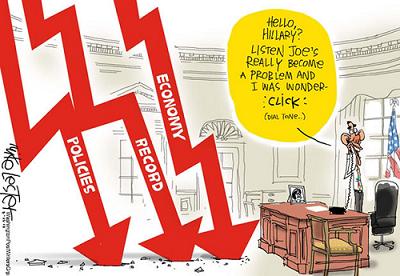 There’s a rumor floating around that the Clintons and Obama are going to cut a deal to make Hillary the Vice President on the 2012 ticket.  Joe Biden, of course, would step down pleading health reasons and Hillary would resign as Secretary of State to help Obama out.  If it were true, it certainly would give Hillary a lock on the 2016 Democratic ticket.

But I can’t see Hillary tying herself to Obama’s mess.  She wants to be “pristine” for 2016.

Dick Morris says it is only that – a rumor.  He thinks that Bill Clinton doesn’t want Obama to win a second term.  Morris went so far as to say that he had talked to “several good friends who are conservatives who have had a lot of exchanges with Bill Clinton in private.”  One of these friends quoted Bill as supposedly saying “you have  6 months to save the country.”

Personally, I can image Bill doing that.   I think he is still livid over the way Hillary was treated during the 2008 presidential campaign or at least livid because she didn’t win the nomination and he lost the chance to be “first dude”.  We know how much he loves those White House interns.

Consider the facts:  Bill certainly hasn’t been much of a buddy to Obama during this campaign.  He went on record praising Romney’s “sterling record” at Bain Capital during a television interview and then rubbed salt into the wound by saying “Democrats shouldn’t cast private equity as bad work.”   It was not a slip of the tongue – it was thought out and calculated.  Of course, after frantic calls from the White House, a smiling Bill had to “clarify” his remarks.

But then, just two days later Bill said that Congress should extend all of the Bush tax cuts, all the while knowing that Obama had threatened to veto any extension.  Again, a smiling Bill had to “clarify” his remarks.

He definitely  isn’t winning  many friends at the White House by repeatedly insisting that Obama and Romney should focus on the issues and quit running attack ads. “The coming election should be about competing visions for the future.”   Which I think is funny since he knows there is no way Obama can run on his record and win!

Charles Krauthammer said it best – Bill Clinton is acting more like a double agent for Romney than a fan of Obama.  “If I were Obama, I wouldn’t want him driving the campaign bus for me – or packing my parachute, for that matter.”