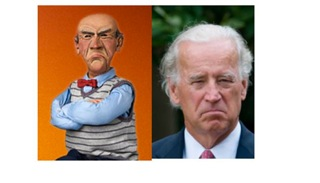 While bashing Republicans and the wealthy at the National Education Association annual meeting, which by the way has endorsed Obama for 2012, Biden said [Romney believes] that those so-called job creators will make everything okay for the rest of us.  We believe that the way to build this country is the way we always have, from the middle out. . .[to] invest in the things that have always made our economy grow: innovation, research, development, infrastructure and education.”  Biden also said that government spending works if there’s “a tax system where everybody, everybody, pays their fair share” and then went on to attack the wealthy among us as “nothing has been asked of them in this horrendous recession. . .”

This coming from a man who said he didn’t want to work so he went in politics!

Is it possible that somewhere in his distorted little mind he actually believes that government creates wealth?  Without the job creators there would be no wealth for the government to tax and waste.  It was those with money that created the jobs that allowed citizens of this great nation to amass their own wealth, thereby giving innovation a voice.