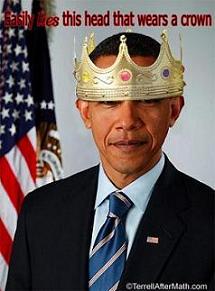 Each President strives to leave his mark on history, sometimes to America’s detriment.

George Washington, our first president added “so help me God” to the oath of office.  Thomas Jefferson wrote the first draft of the Declaration of Independence but his greatest achievement was the Louisiana Purchase in 1803.  Abraham Lincoln led the country through the turmoil of the Civil War and freed the slaves.  Woodrow Wilson left us with the socialist League of Nations, the forerunner to the U.N.

Franklin D. Roosevelt began the first big expansion of government with the New Deal.  John F. Kennedy was our first Catholic president.  Lyndon B. Johnson with his War on Poverty led America to our current welfare state.

What will history show as Obama’s legacy?  So far, not quite through his first term Obama:

At best, Obama believes he is doing all of this for the good of our nation.  At worst, he is attempting the demise of the U.S.

His spend now, pay later policies may propel him into another term through which he can finalize the destruction of this country and, if we don’t vote him out of office, we deserve what we get.