If there is any doubt left that the drive-by media have forgotten what objective journalism is, read the following collection of quotes from  Media Research Center.

Nancy Gibbs, November 17, 2008 Time Magazine cover story:  “Some princes are born in palaces.  Some are born in mangers.  But a few are born in the imagination, out of scraps of history and hope.  Barack Hussein Obama did not win because of the color of his skin.  Nor did he win in spite of it.  He won because at a very dangerous moment in life of a still young country, more people than have even spoken before came together to try to save it.  And that was a victory all its own.”

Keith Obermann, MSNBC election night coverage, November 4, 2008:  “You’ve seen those videotapes of Walter Cronkite the night that man landed on the moon for the first time, when Neil Armstrong stepped out and he could just barely get our monosyllables.  Politically, that’s what this is.  This is man on the moon.”

Bill Weir, ABC, January 20, 2009:  “We know that wind can make a cold day feel colder, but can national pride make a freezing day feel warmer?  It seems to be the case because regardless of the final crowd number estimates, never have so many people shivered so long with such joy.  From above, even the seagulls must have been awed by the blanket of humanity.”

Andrea Mitchell, NBC Nightly News, January 20, 2009:  “It may take days or years to really absorb he significance of what happened to America today.  When he finally emerged he seemed, even in this throng, so solitary, somber, perhaps already feeling the weight of the world, even before he was transformed into the leader of the free world.  The mass flickering of cell phone cameras on the Mall seemed like stars shining back at him.”

Terry Morgan, ABC, February 20, 2009:  “I like to say that, in some ways, Barack Obama is the first president since George Washington to be taking a step down into the Oval Office.”

Joe Klin, Time Magazine cover story, May 4, 2009:  “The legislative achievements have been stupendous – the $789 billion stimulus bill, the budget plan that is still being hammered out (and may, ultimately, include the next landmark safety-net program, universal health insurance).  There has also been a cascade of new policies to address the financial crisis.  In a way, Obama’s 100 days is even more dramatic than Roosevelt’s, says Elaine Kamarck of Harvard’s Kennedy School of Government.  Roosevelt only had to deal with a domestic crisis.  Obama has had to overhaul foreign policy as well, including two wars.  And that’s really the secret of why this has seemed so spectacular.”

George Stephanopoulos on PBS’s Charlie Rose, July 12, 2011:  “I’m trying to think in our lifetime if anybody has been dealt a tougher hand coming into the White House.  . .”

Richard Stengel of Time Magazine, introduction to his new book – Mandela’s Way, March 30, 2010:  “While it took 27 years in prison to mold the Nelson Mandela we know, the 48 year old American president seems to have achieved a Mandela-like temperament without the long years of sacrifice.  Whatever Mandela may or may not think of the new American president, Obama is in many ways his true successor on the world stage.”

Andrew Sullivan, Newsweek’s cover story, January 23, 2012, ‘Why Are Obama’s Critics So Dumb?’:  “It remains simply  fact that Obama has delivered in a way that the unhinged right and purist left have yet to understand or absorb. . .What I see in front of my nose is a president whose character, record and promise remain as grotesquely under appreciated now as they were absurdly hyped in 2008. . .”

Evan Thomas on MSNBC’s Hardball, June 5, 2009:  “Reagan was all about America . . .  Obama is ‘We are above that now.  We’re not just parochial, we’re not just chauvinistic, we’re not just provincial.  We stand for something.’  In a way, Obama’s standing above the country, above – above the world.  He’s sort of God.”

Michael Leahy and Juliet Eilperin, Washington Post, October 12, 2010:  “If an Obama brand exists, it is his image as a probing, cerebral president conduction an exhaustive analysis of the issues so that the best ideas can emerge, and triumph.”

Howard Fineman, The Huffington Post, May 2, 2011:  “by calmly and meticulously overseeing the successful targeting of Osama bin Laden, president Obama just proved himself – vividly, in almost biblical terms – to be an effective commander-in-chief of the armed forces . .”

Piers Morgan, CNN, December 5, 2011:  “When you watch the president like that, I always feel he’s got so many pluses, doesn’t he?  In a sense, he’s personable, he’s handsome, he can be funny.  You know abroad he has this great image for America.  A lot of things are just perfect about Barack Obama.” 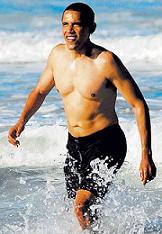 Eli Saslow, Washington Post,  December 25, 2008:  “Between workouts during his Hawaii vacation this week, he was photographed looking like the paradigm of a new kind of presidential fitness, one geared less toward preventing heart attacks than winning swimsuit competitions.  The sun glinted off chiseled pectorals sculpted during four weigh-lifting sessions each week, and a body toned by regular treadmill runs and basketball games.”

Stephen Marche, Esquire, August 2011:  “Can we just enjoy Obama for a moment?. . .can we just take a month or two to contemplate him the way we might contemplate a painting by Vermeer or a guitar lick by the Rolling Stones or a Peyton Manning pass. . .Because twenty years from now, we’re going to look back on this time as a glorious idyll in American politics, with a confident, intelligent, fascinating president riding the surge of his prodigious talents from triumph to triumph. . .Barack Obama is developing into what Hegel called a world-historical soul, an embodiment of the spirit of the times.  He is what we hope we can be.”

← The Oathkeepers
Socialism Is Just A Con Game →