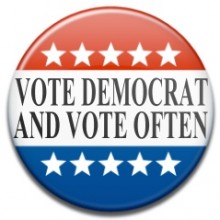 Why I voted for a Democrat:

I believe oil company profits of 4% a gallon are obscene but the government taxing the same gallon of gas at 15% isn’t.

I believe government will do a better job of spending my hard earned money that I ever could.

I believe Freedom of Speech is fine as long as nobody is offended by it.

I believe I am way too irresponsible to own a gun and I know my local police are all I need to protect me from murderers, rapist, thugs and thieves.

I believe that people who can’t tell us if it will rain on Friday can tell us that the polar ice caps will disappear in 10 years because of global warming if I don’t drive a Prius or a Chevy Volt.

I believe that it is okay for millions of unborn babies to be murdered just as long as we don’t execute death row inmates.

I believe illegal aliens have a right to free health care, education and Social Security benefits on my dime.

I believe that businesses should not be allowed to make a profit – only break even and then give the rest to government to be redistributed as Democrats see fit.

I believe liberal judges need to rewrite the Constitution regularly to suit some fringe group who would never get their agenda past by the voters.

I believe it is better to pay our enemies billions of dollars for oil, but it is not right to drill for our own because it might upset some useless endangered beetle, gopher, or fish.

I believe that, even though  we live in the greatest, most wonderful country in the world, we desperately need to become a Socialist nation like most of Europe.

Because  my head is so firmly buried in the sand  it is highly unlikely that I’ll ever have another point of view, unless Democrats tell me I can.

Abraham Lincoln once said that a nation divided against itself can not stand.

The public sector – state, local and federal  – consumes 40% of our Gross Domestic Product.   48% of Americans are now on some form of government handout.  And, even worse, many have been programmed to believe that  they have no future unless government takes more from the “Makers” to supply the “Takers.”

A country where more Americans go on Social Security disability than have jobs can’t stand for long.

Lincoln, a Repubican President, hoped in 1861 that the “angels of our better nature would pull us back from catastrophe.”  He was wrong then.  Let us at least hope that in 2012 those same angels still hoover and can make a house divided whole once more.

← The Speech Heard Throughout the U.S. and Around The World
Rape Of A Nation →