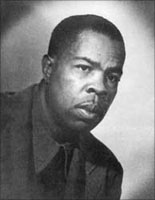 I’ve often heard it said that you can  know  a person by the company that he keeps.   Frank Marshall Davis could go a long way in explaining our current president.

Frank Marshall Davis was a writer, poet and political extremists who was skeptical of preachers and their effect on God and gun-clinging Americans.

His politics were so extreme that he joined the Communist Party in Chicago in the early 1940s where he became the founding editor-in-chief of the “Chicago Star”,  a  Communist Party USA publication.  There, Davis shared the op-ed page with Howard Fast, a “Stalin Prize” winner and Senator Claude Pepper, who at the time had sponsored a bill to nationalize health care in the U.S.     Davis and his publication favored taxpayer funding of universal health care, blasted Wall Street and big business and big oil, demanded wealth redistribution to fund ” public works projects,” attacked Republican tax cuts, excoriated profits and millionaires and corporate executives  —  all traits we see today in Obama.   Davis left the Star in 1948 for Hawaii where he wrote for another Communist publication “Honolulu Record”.

Davis’s politics were so radical that the FBI had him under continued surveillance and the federal government actually placed him on the “Security Index” meaning that in the event of a war between the US and Russia, Obama’s mentor could be placed under immediate arrest.

In 1956 the Democratic run Senate Judiciary Committee called Davis to D.C. to testify on his activities where he pleaded the Fifth.  In 1957 the Democratic Senate published  a report “Scope of Soviet Activity in the U.S.” whee it listed Davis as “an identified member of the Communist Party.”

Davis met Obama in 1970 through an introduction by Obama’s grandfather, Stanley Dunham, for the sole purpose of mentoring.  Dawna Weatherly-Williams was present at the first meeting and described the relationship as influential with Davis impacting Obama on “social justice”, on “life,” on “what’s important,” on no less than “how to use” his “heart and mind.”

Newsweek described Obama’s grandfather as a “lapsed Christian” who likewise did not nurture in Obama a Christian belief system, nor did his grandmother, nor his mother.  His grandparents attended an Unitarian Church known to locals as “The Little Red Church on the Hill.”

Davis said that his  grandfather who was an agnostic “converted me almost immediately.”   By the age of 18 Davis had spent hours reading the anti-religious  writings of agnostics and atheists.   He later became friends with an American black poet and intellectual, Langston Hughes, a loyal “Soviet” patriot.  Langston is quoted as saying that “The USA, when we take control will be the USSA.”  He urged the Marxist faithful to rise and fight for the “great red flag. . .”

Davis said in his memories that he did not forever physically desert churches, always seeing them as valuable social centers for black Americans who needed them and for addressing problems of everyday living.   But in  his writings in the 1940s and 1950s, Davis would take jabs at Christians for their supposed sins of anti-communism and anti-Sovietism.   Davis specifically saw the Catholic Church as an obstacle to his policies, plans and visions for the state.  He argued that devout Christians ought to be devout socialists and communists and given that most Christians in America were anti-communist and anti-Semitic, he questioned whether America was really a Christian nation.  “True Christians should be working together as one” with communists.

He was particularly at odds with the Catholic Church who since the mid 1880s had fiercely opposed communism defining it as a “satanic scourge.”  Communists were not happy and according to Davis “The Catholic hierarchy” had launched a “holy war against communism.” Through his arguments Davis was ignoring Marx and Lenin who generally described Christianity as everything from silly superstition to a form of venereal disease that must be eradicated.    The Soviet Union was officially atheist.  Marx dubbed religion the “opiate of the masses,” and opined that “Communism begins where atheism begins.”  Lenin felt that all worship of a divinity was “necrophilia.”  He created groups like the League of the Militant Godless which was responsible for the dissemination of anti-religious propaganda.

Davis wanted American Christians to pay reverence to the greater glory of the USSR which in his mind was not a nation blowing up churches, gulaging the religious, shooting priests, locking up nuns with prostitutes, declaring them “whores to Christ.”  For black Americans, David upheld the USSR as their true guiding light because Russia had abolished racism and color prejudice.

To help his cause he used the left-wing “social justice” Christians whom Davis referred to as progressive Christians in an attempt to bring about fundamental change.  In a 1949 column Davis applied the case of the Rev. Thomas Harten “for many years one of the most noted Negro pastors,” neglecting to mention that Harten was a member of the general assembly and board of the radical, communist-infiltrated National Council of Churches.   David wanted Harten to preach to Americans about their unwarranted, un-Christian, anti-Sovietism.  Davis actually quoted Harten in one of his columns to have said that “before she [America] preaches to Russia or to any other nation, she must remove the moat from her own eye, and clean up the dirt in her own backyard.”

In a 1949 column Davis entitled “Challenge to the Church” he postured that communism was friendly to Christians.  “On your Judgment Day, when the Lord will ask you for an account of your stewardship, will you have to say, Lord, they were a pack of wolves”  If God will then ask you, My son, did you do all you could to humanize these wolves, to Christianize them, to teach them My Way will your answer be, Lord I was too busy Redbaiting?  The Christian churches and the Catholic church in particular are making a grievous error in their shortsighted belief that the major enemy of Christianity is Communism.”

Not only was the Soviet Union not anti-religious, according to Davis, but it had saved the world from Hitler’s “anti-Christian paganism.”  Davis, like Obama, was a man of the far left making appeals to the “social justice” Religious left for support.

So, how much of Davis’s anti-religious bias and pro-communism rubbed off on Obama.  No one really knows for sure except Obama but the similarities are striking, if not chilling.

Davis was skeptical of preachers and their effort on God and gun clinging Americans.  He viewed the Catholic church as an obstacle to his plans while insisting that Christians should support his ideas and often sought the religious left for his various causes and campaigns.  Moreover, many people were unclear about his personal religious beliefs, including whether or not he was Christian.

Regardless of whether we can make crystal-clear connections between Davis and Obama’s policies, Davis’s story certainly merits our attention.

In the past, for every other president, journalists and biographers didn’t dare ignore mentors; they started with mentors.  So why, only today, with Obama, do we suddenly have the bizarre spectacle of liberal/mainstream journalists and biographers ignoring the president’s mentor, a man who had been a literal card-carrying communist under surveillance by the federal government for decades.?

This was taken from a two-part series based on Dr. Paul Kengor’s newly released book, “The Communist: Frank Marshall Davis, The Untold Story of Barack Obama’s Mentor”.  Dr. Kengor is professor of political science at Grove City College.  You can read “Meet Obama’s Marxist Mentor” in full at this link, and “Christians and Communists Together?” at this link.