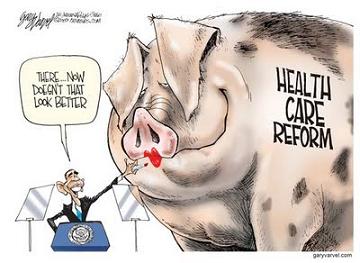 Thanks to the Supreme Court we now know that all those penalties in the new ObamaCare law aren’t penalties  —  in fact they are new taxes to be levied upon all taxpaying Americas.

In about two and one-half years the average taxpayer will have to start providing proof on their tax returns that they have health insurance putting the IRS at the center of the ObamaCare debate.  Those who don’t get qualified (government approved) health insurance will be required to pay a tax unless they are exempt because of low income, religious beliefs (selective religious beliefs such as Muslims), or because they are members of American Indian tribes.

The increased cost to the IRS will be extensive.  ObamaCare will require new regulations, new forms and publications, new computer programs and a big new outreach program to explain the new law along with thousands of new employees to administer the program.  The IRS is expected to spend $881 million in our tax dollars from between 2010 to 2013, hiring more than 2,700 workers and upgrading its computer systems but no one knows exactly what the cost will be in the following years when the bulk of ObamaCare goes into effect.

The law, however, severely limits the ability of the IRS to collect the tax.  There are no civil or criminal penalties for refusing to pay it  The IRS cannot seize your bank account or dock your wages if you don’t have government approved health insurance and,  interest can not accumulates for the unpaid taxes.  The IRS does not have power to enforce the ObamaCare mandate.

They can however,  send you a scary letter threatening audits but if you still refuse to pay the new tax,  they have left is to wait until you file a return that gives you a refund and wham, bam, thank-you mam  – there goes your refund!

But here is the rub  —  if you adjust your withholding or estimated tax payments so that you come out even at the end of the year or even owe a few bucks in taxes  —  the IRS has nothing to deduct the penalty taxes from.  No Refund – No Penalty Tax.

The House Ways and Means Oversight Subcommittee have scheduled a hearing on the tax implications.  Hopefully the House, which holds the purse strings, will refuse to increase the IRS budget.

← Gun Control Vultures Circling the Blood of Victims
In Liberal Colorado, It’s Against The Law To Stop A Massacre →