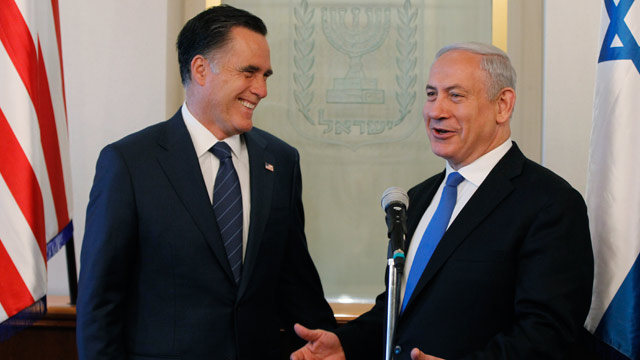 Romney – “We have a solemn duty and a moral imperative to deny Iran’s leaders the means to follow through on their malevolent intentions.”

The conduct of Iran’s leaders “gives us no reason to trust them with nuclear material,” he said. As they edge toward developing nuclear weapons capability, “preventing that outcome must be our highest national security priority.”

“Standing by Israel does not mean with military and intelligence cooperation alone,” he said. “We cannot stand silent as those who seek to undermine Israel voice their criticisms. And we certainly should not join in that criticism. Diplomatic distance in public between our nations emboldens Israel’s adversaries.”

Romney was surrounded by a throng of admirers who crowded around him shouting from the time he stepped out of his motorcade on the plaza. “Here comes the next president,” one man shouted. “He is for Israel,” another man said.

← Immigration Officials “Illegal ‘Dreamers’, even the Criminals, Get A Free Ride.”
Feeding At The Taxpayer Trough →