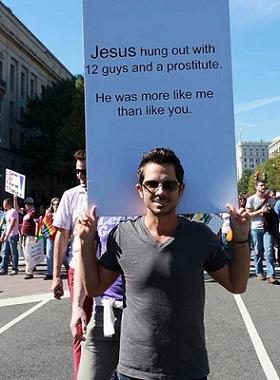 The National Gay and Lesbian Task Force has been sending out mailers to Maryland voters encouraging them to say NO to adding a casino bill to the state ballot this fall.  It isn’t that they are concerned with more casinos, they are just worried that if the gambling bill is on the ballot, Conservatives and Christians, who oppose gambling, will turn out to vote and will probably also vote against same-sex marriage.

Maryland lawmakers approved and Governor O’Malley signed a measure legalizing same-sex marriage in Maryland earlier this year but the law doesn’t take effect until January 1, 2013, giving opponents time to organize and repeal the law at the ballot box in November.

The National Gay and Lesbian Task Force Action Fund’s claims their main reason for opposing the casino bill on this fall’s ballot  —  “We just believe an uncluttered ballot is the best ballot. . .” and it doesn’t hurt that Conservatives and Christians just might stay home.

The existing gambling operations in Maryland are also against the initiative.  Who wants the competition?

The homosexual agenda to legalize same-sex marriage isn’t going away, especially since Obama’s “enlightened” change of heart on the subject.

Democratic Governor Quinn in Illinois says that he stands with Obama on supporting same-sex marriage and vows to legalize it.  Governor Lincoln Chafe of Rhode Island signed an order recognizing same-sex marriage from other states;  Democratic Senator Bob Kerry of Nebraska voiced his support for gay marriage; the Oklahoma state Senate voted overwhelmingly in favor of a resolution reaffirming opposition to same-sex marriage; and,  Colorado Democratic Governor John Hickenlooper called for a special legislative session to vote on civil unions – the measure failed.  Oh and lets not forget that the liberal judges in Maryland ruled that same-sex couples can divorce, even before the new law takes effect.

Of course the Democratic Platform will include marriage equality. “. . .We support marriage equality and support the movement to secure equal treatment under law for same-sex couples.  We also support the freedom of churches and religious entities to decide how to administer as a religious sacrament without government interference.”  Right!  We’ve already seen what Democrats in the Obama administration think of churches and religious entities.

Once the judiciary or legislatures adopt the union of any two persons as the legal definition of marriage, that concept becomes the sole definitional basis for the only legally sanctioned marriage.