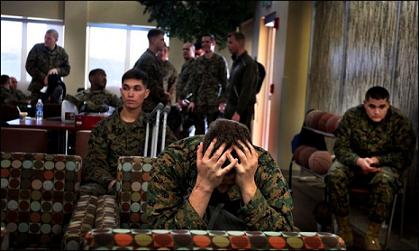 The VA reported that it served 1.3 million veterans during 2011 and within five to seven years, they are estimating that more than 1 million new veterans will enter the system in need of health care.  Unfortunately, the VA that will receive them is already overburdened.

House Veterans Affairs committee ranking member, Rep. Bob Filner, D-CA exploded at a June hearing: “This is an insult to our veterans.  And you guys just recycle old programs and put new names on them.  We just keep announcing new names, new pilot programs, on and on.  If it wasn’t tragic, it would be ridiculous.”

By 2013, federal funding for veterans, at $140 million, could surpass total federal funding for education.   Including claims centers and hospitals, the VA employees about 300,000 workers,  3,300 of those employees have been hired since 2010 just to augment the staff processing disability claims.

The VA backlog of claims goes back to the 1990s and has grown even more rapidly with the U.S. military fighting two police actions.  From January 2011 to the week ending July 9, the backlog roughly doubled, from 300,000 claims to just over  600,000.   More than two-thirds of pending claims, each representing an ailing or injured veteran is months behind schedule.   The average claim adjudication wait time is as few as 183 days or as many as 300, depending on who you ask.

Part of the problem is that the government has never updated VA technology.  The VA and the Department of Defense both use incompatible information technology systems, unable to easily communicate regarding veteran’s health records.  And, even worse, the claims system remains largely paper based.

Veterans officials are aware of the problems but like anything associated with the government, nothing ever gets done – the layers of bureaucracy are too long.

And before anyone starts in that I have no appreciation of what the VA does:  My dad, my brother, and my husband  all received excellent medical  care at VA  hospitals.  These dedicated people are over worked and under appreciated.  They do the best with what they have.   If there is anyone reading this that would like to see for themselves what the local VA facilities are up against,  volunteer.   They desperately need your help!

The problems with the VA begin at the top – with the bloated government bureaucracy and with Congress who loves to talk about the problems but are unwilling to change the status quo.  Think of the type of VA system we might now have  if  the Obama administration had spent money updating technology and refurbishing VA hospitals instead of  wasting it  on now bankrupt alternative energy companies to keep his re-election campaign donors happy.   Would not that money have been better spent on those men and women who risked their lives to keep America safe?

The VA Chief Financial Officer, W. Todd Grams, reported at a Congressional committee meeting, that the bureaucracy at the Department of Veterans Affairs, instead of investing their budget wisely, have been partying, to the tune of  $9 million on just two conferences in 2011 which included such needed items as  $84,000 for branded promotional items such as pens, $3,000 for two event photographers and $52,000 to produce a pair of eight minute videos spoofing the film “Patton” that they showed at these conferences.   But it goes much deeper.   In fiscal year 2011, the DVA spent  more than $100 million total on such events even though their budget was roughly $20 million.

Congress is looking into the matter.   Somehow that doesn’t give me much comfort!