Virginia already has one liberal Senator in Mark Warner – do we really need another one?   Wasn’t 4 years enough? 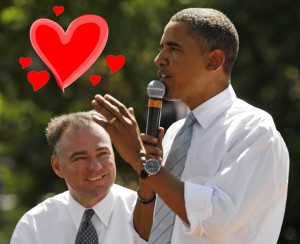 Tim Kaine, former Democratic Governor of Virginia,  is an Obama “want-a-be”.    He has been Obama’s biggest cheerleader doing “what the President wants  me to do. . .going out and being the president’s advocate and promoter. . .it’s a wonderful job. . .”   And well, Obama thinks Kaine is the best thing since sliced bread calling him “one of my greatest friends” and “the first person to endorse me outside of Illinois.”  Kaine was Obama’s choice to head the Democratic National Committee.

When Obama proposed the “Buffet Rule” Kaine said it wasn’t big enough.  Obama should shoot for an additional $500 billion in new taxes.

Kaine said that gay couples should have equal rights but was afraid to come out with an endorsement for same-sex marriage even though he successfully lobbied against a 2006 amendment that would have banned same-sex marriage in Virginia.

To be fair to Kaine, he did separate himself from Obama on the HHS mandate requiring religious organizations to provide for birth control, sterilizations and abortion drugs, but  he opposed the Catholic Church’s lawsuits against the Obama administration.  And, he is a proud supporter of Obamacare.

As governor of Virginia, Kaine appointed Dr. Esam Omeish to his Immigration Board.  Omeish had ties with Anwar Al-Awlaki at the Dar Al Hijrah Islamic Center and was former president of the Muslim American Society, a Muslim Brotherhood affiliate.   In 2007 Kaine was a keynote speaker at the 5th Annual Muslim American Society Freedom Foundation.

From day one of his governorship, Kaine, who has a degree in economics,  was all in for tax increases.   Rather than work with the Virginia legislature, he proposed permanent tax increases, tuition increases and small cuts.  While economic times were good, Kaine increased liberal entitlement spending and failed to cut spending when the economy contracted in 2007.  Which goes a long way in explaining his Senatorial platform of allowing the Bush Tax Cuts to expire.   Obama would be so proud!

Kaine helped to force the resignation of 5 Virginia State Police Chaplains because they prayed publicly “in the name of Jesus“.   When Republican House leader Morgan Griffith and Delegate Charles Carrico issued public statements defending the Chaplains and questioning Kaine’s role, Kaine said he managed to pray without mentioning the name of Jesus and his spokesman called out Griffith for daring to attack Kaine’s faith.

In 2006 Kaine forced the resignation of a Virginia State Climatologisy, Dr. Patrick Michals, a professor at UVA because the professor had his doubts about all claims of the  global warming scam.  Bet that gained him a few favors with the likes of big Al Gore.

Kaine is a dyed-in-the wool environmentalist  who supported Cap and Trade legislation calling for a 30% reduction in emissions and a 19% decrease in consumption.  In 2009, as DNC Chair, Kaine wrote to the Interior Department asking them to hold off on the fed’s planned offshore oil and gas lease sale.  As governor, Kaine refused to sign a General Assembly bill to allow Virginia to opt out of the federal moratorium and obtain leases for off-shore drilling.   He also set up his own Commission on Global Change to justify massive new regulations in the state.

As governor Kaine proposed requiring background checks for anyone that wished to buy a firearm at a gun show.  As DNC chair he supported measurers to limit the number of bullets a magazine could hold.  As Richmond City Councilman and Mayor he wanted to sue gun manufacturers and proposed organizing Virginia metro areas into political blocs that could push for firearm legislation.  As governor, he funneled taxpayer money to fund the Million Mom March in support of the Brady bill.   Of course, as a candidate for Webb’s seat – he supports the 2nd Amendment.

In 2008 Kaine made a decision to cede control of the $6 billion Dulles Rail project to the dysfunctional Metropolitan Washington Airport Authority.  Virginia Delegate Tim Hugo said that “the rising costs, the jobs lost to other states, and the ongoing mismanagement of this project are the result of Tim Kaine’s bad decisions.”  Kaine also appointed Dennis Martire, a vice president of the Laborers’ International Union of North America to the board.  Martire openly pushed  for a Project Labor Agreement (PLA) which would mandate union rules for construction and preclude Virginia companies from competing.  The project ran $150 million over budget in the first phase of construction prompting U.S. Representative Frank Wolf to call for an inspector general’s audit in 2011. “There’s ethical lapses, contractual lapses all over the place. . .”  Unions got the jobs – Virginia taxpayers got the cost!

Our nation is facing tough problems and Viriginia needs at least one Senator who will work to lower taxes, reduce the size of government and find ways to grow our economy.  Do we really want Kaine to put his Mark on the Senate?

3 comments for “The Mark of Tim Kaine”