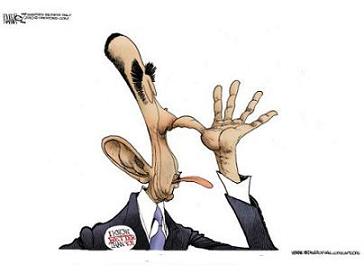 While Obama dismantles our immigration laws,   DHS has been deporting illegal immigrants like mad – or at least both would have us believe.  It turns out that they both are liars.  They have been fudging the numbers for the peasants.

Rep. Lamar Smith of Texas  discovered that the total number of deportations, including criminal and non-criminal is down.  Turns out that Dear Janet has rewritten the definition of “deportation”  to include  illegal immigrants caught on or near the border by the Border Patrol and immediately returned to Mexico.   And, to make things look even better for the Obama administration, she can count the same illegal aliens over and over again as they continually try to sneak into the U.S.  and hopefully get caught.

Deportations rose under the Bush Administration in 2007 and continued through Obama’s first year in office.    This is one instance where Obama could blame Bush since those deported during  Obama’s first year were the result of hundreds of thousands put in proceedings while Bush was in office.  But wouldn’t you know – this is one that Obama is claiming credit for!

Since the ruse is over, I can’t help but wonder when Obama will strike a pose for the camera and claim he knew nothing about it, that is if he can actually bring himself to respond.

Several days ago DHS began accepting applications for the deferred action scam – Obama’s executive amnesty program.  I am sure that neither want the peasants to know that their little executive scheme will add nearly 2 million plus workers to the U.S. job market.   Recent college graduates should love that.

And in spite of all the assurances that this is a compassionate program  for some of the “best and brightest”, DHS is only requiring copies of documents to prove their length of time in the U.S., their education and even their identity.    DHS has also agreed to accept any document from a report card,  a plane tickets,  correspondence or employment records  which should be easy since they don’t have to provide valid proof of their identity or even show up at an official office for a face to face interview.

And, just in case someone that works at DHS cares enough to try and verify information on the application,  punishment for submitting forged or fraudulent is nothing more than a smack on the wrist.

Those illegal aliens who pass all this scrutiny will be granted work authorization so they can get a real Social Security card and maybe even a driver’s license.  That should really help those that apply that have criminal records.  You got it – the only thing that DHS claims will keep them from approval is a felony.  All other criminal activity will be ignored.  Actually, when you think about it, since DHS isn’t going to really try to verify anything, how do we know that felonies won’t be accepted.

Estimates range around $900 billion to give this instant citizenship.  These “new” citizens will now be legally able to tap  into food stamps, welfare, assisted housing, medicaid and scholarships.

Looks like the middle class has been had – once again!

← Proud to be a Virginian
ObamaCare Explained →