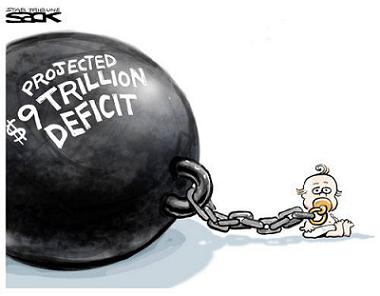 The Congressional Budget Office forecast indicates that by 2021 the U.S. government debt load might rise to Greece’s lofty level.

James Harrigan of Utah State and Antony Davies of Duquesne University said that the CBO has a solid track record predicting GDP and at $25 trillion, that leaves us with a debt to GDP ratio of 146%.  “To avoid the mess we need freer markets, sound money, restricted spending and time.”

Low interest rates and extremely accommodative monetary policies will leave the country with no choice but to return to a modern version of the gold standard according to Steve Forbes.  The GOP platform has called for a commission to study the feasibility of the gold standard, which attaches the value of the dollar to a fixed weight of gold.

President Richard Nixon dropped the gold standard in 1971 and opened the era of the “fiat dollar.”  That, by the way, is a dollar not worth the paper it is printed on.  Supporters for the return to a gold standard said it would prevent the government from living outside of its means.

Forbes writes that even though gold will take a back seat to jobs, Middle East tensions and entitlement and other economic reforms in the upcoming election, ” the yellow metal will be a hot topic in the next 24 months.  The commission is going to take on an importance that will astound today’s political punditry, besotted as they are with stale Keynesian quackeries about money, taxes and spending.”

“The ever deepening financial crisis around the world will force the new Romney-Ryan administration to consider, and quickly, too, dramatic measures to deal with the disaster.  The Obama/Bernanke Federal Reserve has been an abysmal failure.  No major country’s central bank has been so destructive since the Fed in the 1970s; prior to that, nearly a century ago, it was Germany’s central bank, which created a hyperinflation that helped set up an environment for the Nazi revolution.”

The Fed under Bernanke has slashed interest rates to near zero and has injected some $2.3 trillion of paper money into the economy by purchasing assets such as Treasury holdings or mortgage-backed securities from banks, a monetary policy known as quantitative easing that floods the economy with liquidity to encourage investing and hiring.  Unfortunately, quantitative easing is nothing but printing money out of thin air which  ensures inflation down the road.

This could not and would not happen under a gold standard.

“In order to work properly and productively, markets need a reliable pricing mechanism.  By manipulating interest rates on such an unprecedented scale the Fed has effectively destroyed the ability of our credit markets to genuinely price the borrowing and lending of money.  Does anyone really believe a 10 year Treasury should yield little more than 1.5% or a 30 year government bond just under 2%?”