A mob of Egyptian protesters scaled the walls of the U.S. embassy in Cairo Tuesday.  They  pulled down the American flag and tried to replace it with a black flag of the Muslim Brotherhood with the words “There is no God but Allah and Mohammad is his messenger.”  The American flag was torn and the remains burned.

An attack on our embassy is an attack on America.  What did our Wuss-in-charge do?

The Embassy released a message that they condemned “the efforts by misguided individuals to hurt the religious feelings of Muslims – as we condemn efforts to offend believers of all religions.”  Unless that religion is Christianity.    They could not have  released that statement without approval of the White House.   It is typical Obama speak!

Heavily armed Libyans assaulted the U.S. diplomatic compound in Benghazi, setting fire to the buildings and killing 4 Americans, including Ambassador 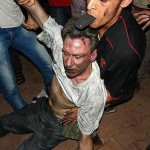 Christopher Stevens.  I heard this morning that Stevens body was missing anywhere from 9 to 12 hours before being turned over to American officials.  No one knows how he died.  I’ve also heard reports that Libyan officials did nothing to prevent the attacks.

Secretary of State Hillary Clinton asked “How could this happen in a country we helped liberate, in a city we helped save from destruction?”

I can answer that.  Muslims don’t fear us nor do they respect us.  They hate us and have said so repeatedly.  As Obama has spent his last three and one-half plus years bowing, scraping and apologizing  to our enemies and snubbing our allies,  he has made America a joke.

The Muslim Brotherhood is a threat to the United States.  Instead of standing up to them, Obama embraced them.   He has even gone so far as to whitewash their intent to force the world to accept Allah and sharia law.    He tells us it is racist to question the loyalty of Muslim officials working inside the government despite evidence that they had undue influence over Mideast policy. The Brotherhood fronts have had unfettered access to his administration.

Obama is not only personally receptive to them but is actually allowing them to advise him and his security staff about outside threats related to Islam and even about the content of counter-terrorism training manuals.

And, as the middle east burns, Obama attends another fundraising event.

The man who set this deadly sequence of events into motion wants 4 more years.

← Worshipping at the Altar of Political Correctness
Ambassador Raped Before Murdered →