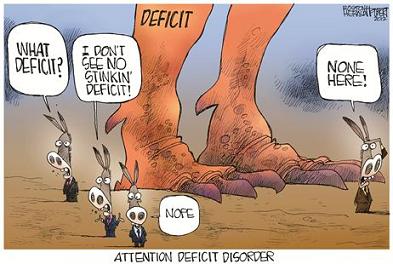 “The fact that we are here today to debate raising America’s debt limit is a sign of leadership failure.  It is a sign that the U.S. Government cannot pay its own bills.  It is a sign that we now depend on ongoing financial assistance from foreign countries to finance our Governmentt’s reckless fiscal policies.  Increasing America’s debt weakens us domestically and internationally.  Leadership means that ‘the buck stops here.’  Instead, Washington is shifting the burden of bad choices today onto the backs of our children and our grandchildren.  America has a debt problem and a failure of leadership.  Americans deserve better.”    Senator Barack H. Obama, March 2006

Without muss or fuss, Congress just voted overwhelmingly to keep the federal spigot open for six more months.  There were no shouting matches, no threats of a government shut-down, no hostage takings.  Even some Tea Party lawmakers approved the $1.047 trillion measure.

Only last summer  Republicans cast the debt ceiling fight as a principled economic response to unsustainable borrowing and the only way to avoid a Greek like comeuppance at the hands of the bond market.    The U.S. came within days of defaulting on our IOUs.  Standard & Poor downgraded the government’s credit rating and the recovery went into reverse as consumers delayed purchases and businesses hunkered down.

The debt-ceiling drama barely moved the long-term debt trajectory.  But it did leave the country standing at the edge of a fiscal cliff, at the bottom of which lies another recession.  It also raised doubts about whether Congress and Obama can govern and led the rest of the world to question our sanity.

If last summer’s fight was necessary to save the country from fiscal wrack and ruin, why is this fall’s continuing resolution, as the measure is called, not a threat to Western civilization?  It even adds another $8 billion to the deficit and exceeds the House Republicans’ budget blueprint by $19 billion.

What were they thinking?  Some lawmakers, in trouble back home and anxious to return to their campaigns, are concerned that a government shutdown would invite an anti-incumbency rout.  Republicans may be timing their next fiscal showdown for after the election in case voters come to their senses and toss out Obama, or they obtain a majority in the Senate, or both.  But those are political, not economic calculations.

In May of this year House Speaker John Boehner insisted that he would not allow an increase unless the amount of the increase included equal or greater amounts of spending cuts.  “This is the only avenue I see right now to force the elected leadership. . .to solve our structural fiscal imbalance.”  So much for having our backs!

Bernanke has issued quantitative easing number 3 (QE3) to try and jolt the economy.   During the first round the Fed snapped up $1.7 trillion in mortgage securities and during the second round the Fed bought $600 billion in Treasury Securities held by banks.  Now the Fed plans to buy $40 billion in mortgage-backed securities from banks every month until the economy and labor market improve.

These policies plant the seeds for inflation down the road, weaken the dollar and artificially pump up stock prices.  These loose policies threw the country into its crisis in the first place by swelling a housing bubble that popped.

Stock prices are increased by pushing down long-term borrowing costs and by weakening the dollar in a way that stocks look attractive.  This creates a wealth effect that aims to encourage businesses to invest and hire and even households to borrow.  Unfortunately for the broader economy, only the wealthy benefit from rising asset prices.   QE1 and QE2 did little to create jobs.

Dr. Marc Faber, an international investment analyst and entrepreneur, said that “QE helps rich people whose asset prices rise and whose net worth then increases but it doesn’t flow to the man on the street who is faced with higher costs of living with price increases.”  You end up with a “small economy that is booming, but the majority of the economy is damaged by QE.”

Banks are already sitting on $1.6 trillion excess reserves.  Is Bernanke really dumb enough to believe that another $40 billion a month is going to suddenly jar them into making loans?  We’re liquidating our debt through inflation.

Peter Schiff, Euro Pacific Capital calls QE3  a “kamikaze monetary policy,”  and  Anthonly Randazzo, an  economists said that it is just  a “regressive redistribution program boosting wealth for those in the financial sector” and ignoring the rest of us.

Stocks have hit multi-year highs recently but are due for sell-off since the gains have not been based on fundamentals but rather loose Federal Reserve policies.  “The Feds liquidity injections into the economy have artificially propped up markets,”  according to international investor Jim Rogers.

Since the 2008 financial crisis, the Fed has slashed interest rates to near zero and has carried out two rounds of quantitative easing, and now planning a third, under which the U.S. central bank floods the economy with liquidity with the aim of further pushing down borrowing costs.   “The 30% gains since last October have been largely driven by one catalyst – the Fed.  It is going to end terribly.”

All the liquidity in the world won’t kick-start the economy if consumers and businesses have little confidence in recovery and opt to hold off demanding more goods and services.

Cornelius Hurley, director of the Boston University Center for Finance, Law and Policy said that “what the Fed is trying to do is send a signal that rates are low and are going to stay low for a long period of time, so it’s a good time to come off the sidelines consumers and start buying tht house or car. . .Unfortunately, the Fed ends up chasing its tail a little bit on this in that it’s signaling it doesn’t have the confidence that the economy is going to come back in that period of time.”

So far, Obama and Bernanke’s  economic policies have done nothing but drive us deeper into debt – and closer to bankruptcy.  4 more years will mean the end of America.

Egan-Jones Ratings Co. has now downgraded the U.S. credit rating to AA- because QE3 has the possibility of weakening the dollar and pushing up inflation.  Friday, the dollar fell against the Euro and the Swiss franc.  “The increased cost of commodities will pressure profitability of businesses and increase costs of consumers, thereby reducing consumer purchasing power.”  Translation:  EVERTHING WILL BE MORE EXPENSE AND YOUR MONEY WORTH EVEN LESS!

“We will all soon see that while printed money has been the so-called medicine of the recovery, that medicine is about to become the poison when the dangerous side effects kick in.”   Bob Wiedemer, economist

← The Future of America?
Obama Bows Once Again To Muslim Brotherhood →