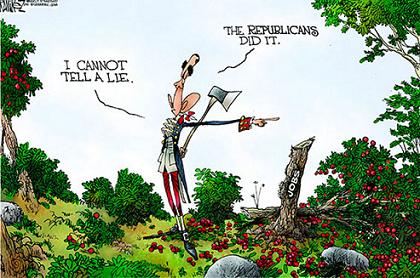 Obama has had over 3 1/2 years to turn the economy around but so far, all the Democrats have achieved is to point the finger of blame at Bush and Republicans in the House.

Their pathetic attempts to fix the economy and job market by throwing money around like it grows on trees – when in reality, it comes from Bernanke’s printing press – has failed miserably.   Now Bernanke is betting on  QE3 which will accomplish nothing but drive prices up and our dollar down, unless you happen to be a wealthy investor.

But never fear, Democrats are full of new ideas.

Rep. Maxine Waters, D-CA wants a new $1 trillion stimulus for social programs which she claims will fix everything.  Duh, everyone knows the solution to any problem is to throw money at it.  Just look at California’s economy and how well throwing money at a problem  worked for the public education system.

Rep. Rosa Delauro, D-CT and Senator Tom Harkin, D-IA introduced another version of Miller’s bill,  the Rebuild America Act which would raise the minimum age by 35% and then index it to inflation.  They also want to raise the minimum wage for tip earners by over 200%.

Gee, now that I look at it in print, it seems Democrats only have one shared idea to fix the economy.

But, increases in the minimum wage will only exacerbate unemployment.  When dealing with a stagnant economy, businesses will just cut payroll.

When Congress raised the minimum wage to $7.25, the job market took a big hit.  Cornell University’s Industrial & Labor Relations Review cited a study showing that it led to roughly a 20% cut in jobs for the young and low skilled workers.

Michael Saltsman, research fellow at Employment Policies Institute, a free market think tank in D.C. says that “if the minimum wage had been linked to inflation since it was first created in 1938, it would only be about $4.00 now.”  Inflation rises and falls so the minimum wage would also rise and fall.

Retail establishments, restaurants, hotels and the entertainment business, which are barely surviving in this economy, would face the biggest job losses.

According to the Employment Policies Institute, the number of jobs that could be lost by such a large increase in the minimum wage could run anywhere from 256,200 to 786,600.

Minimum wages are a poor way to reduce poverty,  and will reduce employment job opportunities among the least skilled, affecting  numerous younger workers.