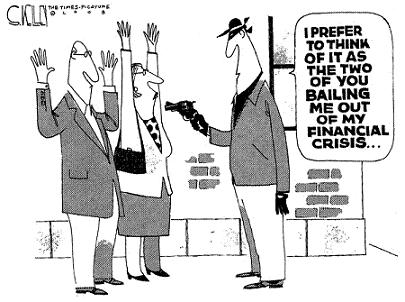 Some of the big corporate bailouts by taxpayers from 2008 which angered so many Americans, have actually ended in a profit for the government according to the Treasury.  But, there is still more than $200 billion outstanding.

Taxpayers  lost money on the bailouts of General Motors and Chrysler according to Treasury figures.   GM received $51 billion and has repaid about $24 billion so far.  But GM shares will have to rise to almost $57 a share from its current price of just over $23 for taxpayers to be made whole – a tall order.

Already the government has written off $1.3 billion in bailout funds to Chrysler Group controlled by Italian automaker Fiat.

Another auto related recipient, auto and home finance firm Ally Financial, formerly GMAC, received $16.3 billion but has only repaid $5.7 billion to date.  GMAC still owes taxpayers around $10 billion  from bailout funds it received as part of the GM/Chrysler bailout.  They put their home mortgage subsidiary into bankruptcy to try and end the drag on its toxic mortgage assets.   Ally may not be able to pay the difference without a successful IPO , which could leave taxpayers holding the bag.

But not all is gloomy on the bailout front.  Treasury reported that the AIG bailout turned a profit of $12.4 billion for taxpayers.  TARP bailouts for Citigroup, Bank of America and Goldman Sachs turned a profit of $25 billion.  But, there is still $14.8 billion  owed by nearly 400 smaller banks.

Fannie Mae and Freddie Mac however,  are still a large black cloud looming over taxpayer’s head.  Taxpayers have already spent more than $185 billion to prop them up and the government is estimating it could top $259 billion to support them until 2014.   In February of this year, Fannie Mae which received over $116 billion in bailout funds  asked Uncle Sam for another $4.6 billion to cover their 4th quarter losses.   Fannie Mae and Freddie Mac have paid back a mere $70.7 billion in dividends and profit.

Treasury is also estimating that more than $10 billion is yet to be prepaid from smaller TARP programs.

Unless my math fails me, taxpayers are still owed  much more than $200  billion.  The government  has already written off $1.3 billion and may have to write off $10.7 from GMAC and possibly another $27 billion from GM.   I’m sure any profits made on the repaid bailout funds were barely  sufficient to pay the interest on the money we had to borrow from foreign countries for these “too big to fail” institutions.