It is a beautiful, if creepy thing, this Fabian Window. And since I first wrote about it four years ago—before Obama’s socialist administration came to power—the message contained in the stained glass has become creepier still, for the message in the glass portends where Obama has taken us the last four years and where he intends to take us yet. It illustrates his game plan, his program, his ideology and his modus operandi. And it might as well hang in the White House for all to see. For the sheep’s clothing has been removed and we see the wolf for what he is…..

The wolf plays a prominent role in socialist thought. V.I. Lenin once said “When you live among wolves you must howl like a wolf,” meaning, of course, that if political necessity requires you to act like a capitalist or live among capitalists while you organize and work for socialist causes, you must act like those among whom you live. This is simply a matter of expediency.  Norman Thomas, a founder of the A.C.L.U. once said:

“The American people will never knowingly adopt socialism. But under the name of ‘liberalism’ they will adopt every fragment of the socialist program until one day America will be a socialist nation, without knowing how it happened.”

There is a stained glass window (see above/below) currently on display in the London School of Economics. Designed by George Bernard Shaw to commemorate the founding of the Society, the “Fabian Window” features Society members hammering the world in order, as the motto proclaims, to “REMOULD IT NEARER TO THE HEART’S DESIRE.” [sic].

A close and politically astute friend of mine—and leading expert on socialism—exclaimed: “How brazen are the socialists!”  When I asked why, he pointed to the image of the wolf dressed in a sheepskin displayed prominently on the Fabian Window—a stark and ostentatious reminder that the goal of the socialists is to work secretly, in disguise (just as Lenin counseled) and adapt to the flock, herd, or society in which you are moving and working.  Put simply, if you read and study socialist thought, the message is very clear:  work to remould the world to your heart’s desire and work for socialist causes discreetly—in disguise—and adapting to whatever milieu in which you are working. This, of course, begs the question: “Whose heart desires to remould the world and how? Depending on who has the hammer—we may or may not like the change.

Obama looks good. He is (as Biden once said during the 2008 primaries) “intelligent and articulate.”  He wears nice suits. He has wonderful stage presence and he is a rock star.  And people still have no idea who he is, where he came from, who influenced him or what his plans are if he—the most inexperienced politician ever to come out of nowhere—is re-elected president.

Influenced by Uncle Frank Marshall Davis (a communist organizer in Hawaii who was no fan of racial equality and whose agenda was only to promote racial and class struggle), Billy Ayers and Bernardine Dohrn—two unapologetic American terrorists who went underground for years to foster terrorism and support our enemies right here in our own country, a radical black liberation “minister” and others, Obama has an agenda. And, the change of which he speaks may well not be what most Americans think, or want.

What are his plans for America?

If this sounds suspiciously like the message on the Fabian Window, the writings of V.I. Lenin or Antonio Gramsci, well, it should. He has plans for America and the world. He has had the sledge hammer for four years now. He continues to “remould the world nearer to [his] heart’s desire.”  We must ask who he is really. Americans have not asked enough; they are far too trusting and far too naïve when it comes to Obama.

And this November, we must take away his hammer. Source: William Kevin Stoos – canadafreepress

George Bernard Shaw unmasked the simple mindset of the semi-secret Fabian Socialist Society, as he was

one of their number. Shaw stated the Lucifarian goal:

“Under Socialism, you would not be allowed to be poor. You would be forcibly fed, clothed, lodged, taught, and employed whether you liked it or not. If it were discovered that you had not character and industry enough to be worth all this trouble, you might possibly be executed in a kindly manner; but whilst you were permitted to live, you would have to live well.”

Ezra Taft Benson, Dwight Eisenhower’s Secretary of Agriculture, the first man the US Press predicted to be outed from the administration given his staunch anti-communist and severe anti-socialist policies stated the agenda of what he called the “socialist-communist conspiracy:”

“I have talked face to face with the godless communist leaders. It may surprise you to learn

that I was host to Mr. Kruschev for a half day when he visited the United States, not that I’m proud of it. I opposed his coming then, and I still feel it was a mistake to welcome this atheistic murderer as a state visitor. But, according to President Eisenhower, Kruschev had expressed a desire to learn something of American Agriculture — and after seeing Russian agriculture I can understand why. As we talked face to face, he indicated that my grandchildren would live under communism. After assuring him that I expected to do all in my power to assure that his and all other grandchildren will live under freedom he arrogantly declaired in substance:

“ ‘You Americans are so gullible. No, you won’t accept communism outright, but we’ll keep feeding you small doses of socialism until you’ll finally wake up and find you already have communism. We won’t have to fight you. We’ll so weaken your economy until you’ll fall like overripe fruit into our hands.’

The Fabian’s have as their coat of arms; a wolf in sheep’s clothing, and they desire to mould the earth “nearer to the[ir] hearts desire.” [picture below]

And then, in great sinister admission of strategy and tactic, they seduce the masses into bowing down and worshiping the learning of man, his false philosophies that are anti-Christ. These teachings all holding within them the seeds of destruction which run civilizations into the ground.

Fascinating is the study of the Fabian socialists, a semi- secret society and their agenda, which is moving forward beautifully for them as they “hammer” away in forging the New World Order with the North American Union here in the Western Hemisphere. The middle class is reduced year by year into poverty.

Dwight Eisenhower’s Secretary of Agriculture, Ezra Taft Benson, spoke to Nikita Cruschev who boasted of the agenda that they (the communists and socialists) were moving forth with. He stated they would give us (American’s) small doses of socialism until one day we would wake up and find we had communism, and then he boasted, we would “fall like overripe fruit into their hands.” Benson, later lamented: “and they’re ahead of schedule in their devilish scheme.”

Indeed, these wolves in sheep’s clothing have ‘seduced the more part of the righteous until they have come down to believe in their works and partake of their spoils.” The throngs of the masses foolishly worship these false and destructive, anti-American philosophies of government, economics, education, religion; the sciences; the arts, and every other area of learning. Perhaps there are enough American’s who will awaken soon and shed this corruption before civilization is surely “wrecked to pieces.” 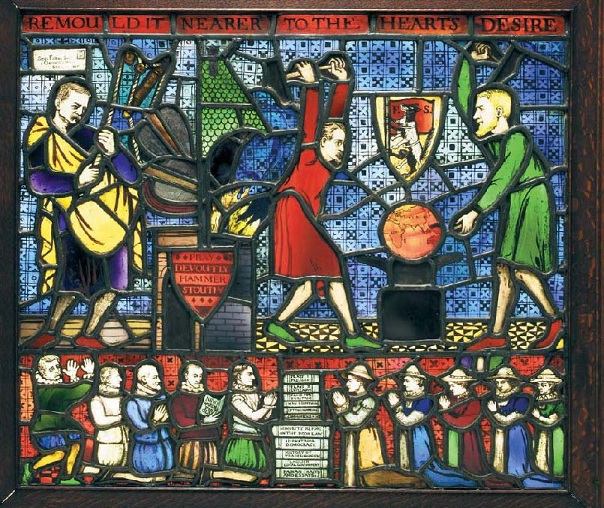