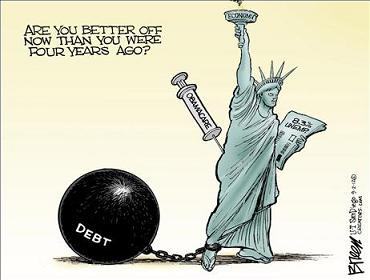 Unemployment  has been above 8% since February 2009, the longest stretch since WWII.

Companies are keeping payroll lean as a weakened  economy and lack of clarity on the tax policy for  2013 cloud the demand outlook.

Food Stamp use climbed to a record 46.7 million in June.

Manufacturing shrank for the 3rd month in August in the longest slide since the recession ended.

The Bloomberg Comfort  Index decreased to minus 47.4 in the period ending August 19, the 6th consecutive drop, and the longest series of decline since 2008.

Household income is down sharply.  From June 2009 through mid 2012, inflation adjusted median household income fell 4.8% to $50,964.  Income has dropped more since the beginning of the recovery than it died during the recession.  Overall median income is 7.2% below December 2007 and 8.1% below January 2000 where it was $55,470.00.  Households led by self-employed individuals saw their income drop 9.4% to $66,752; households headed by private sector employees saw their wages drop by 4.5% to $63,800; but households led by government workers only saw their median income decline only 3.5% to $77,998.   You read that right.  Government worker households earn 17% more than self-employed, and 22% more than private sector workers and lost a lot less of their income under the Obama administration.

Can anyone  honestly say that they are  better off today than four years ago?

Obama blames the European debt crisis and economic slowdown in Asia as the reason the U.S. economy is stuck in a rut.  Somehow in the back of his mind, I’m sure he thinks Bush is responsible for that also.

But, neither  Europe nor Asia are  responsible for our lousy economy –  our own government is to blame.    It didn’t start with Obama –  but it may very well end with him.

The economy is not at the beginning of a recovery – we are at the end of a disastrous debt super-cycle that has gone on for the last forty  plus years.  It started when Nixon defaulted on our obligations under Bretton Woods and closed the gold window.   Since then the government has been living in a vicious cycle of massive borrowing and spending.   The U.S. economy is saddled with a  massive debt that we can’t repay forcing the government to  continue to borrow more and more just to cover the interest on the debt, that we can’t repay.

We have a whole generation of people ready to retire, most without sufficient  personal savings.  And those that did save have seen the bottom fall out of their investments.  The U.S. debt is unsustainable – there is no way the government can pay for all the entitlements they promised.

If all that massive debt load wasn’t bad enough,  we have a president who has either deliberately or through ignorance  done all he could to kill what was left of the economy.

Obama, Harry Reid and Nancy Pelosi pushed a massive new entitlement program past a Congress who didn’t even bother to read it.  Obamacare, loaded with massive tax increases on every American and every business will gut Medicare and strangle the economy if not repealed.

The Obama administration  imposed 75 new major regulations from January 2009 through mid 2011 with annual costs of $38 billion and are proposing another 7 new regulations projected to cost businesses and eventually consumers, somewhere between $35 and $100 billion more.

Obama unleashed the EPA agenda driven bureaucracy against American business and capitalism.  Their new greenhouse gas rules could cost America another 7.3 million jobs and add $32.2 billion annually in new regulatory costs.  The EPA’s new rules on boilers would wipe out 18% of the workforce in pulp and paper mills.   If you were a business owner would you be creating new jobs?

And even though Obama promised to “cut the deficit in half by the end of his first term” he’s purposely gone on the largest spending binge in recorded history.  His cash for clunkers, tax credits for first time home buyers and his stimulus package were a bust, doing little or nothing to boost the economy.

The Democrats new banking regulations have made it almost impossible for banks to loan money to businesses and have ended up costing consumers  fees for services that once were free.

Obama has all but shut down domestic oil drilling in favor of “green” alternative energy that has done nothing but waste taxpayer dollars on now bankrupt businesses.  The solar and wind farms he has pushed  provide only a tiny portion of required energy at up to three times the cost of energy produced with fossil fuels.

Obama and his lap dog media has relentlessly demonized wealthy Americans, the tea party,  whites, Patriots, Veterans,  Conservative Blacks and Christians in his not so veiled attempt to divide the country.

Obama’s borrow, tax and spend, steal from one to give to another ideology is destroying the middle class and dashing the hopes of college graduates.  Obamanomics has created debt that kills any chance of prosperity.  His economic policies, coupled with drastic cuts to the defense budget is putting all Americans at risk.

He has encouraged our enemies while  insulting  our allies.  His political correct policies are directly responsible for the needless deaths of at least 100 of our military at the hands of Afghanistans they are training.

Obama has attempted to destroy our religious liberties through ObamaCare and through the acceptance and promotion of the radical homosexual agenda.  He uses taxpayer money to support an organization whose primary purpose is to murder innocent unborn babies and is on record for supporting the murder of those babies who happen to survive abortion.

Obama has subverted the Constitution, made end-runs around Congress and rules by Executive Order.

I don’t see how anyone could claim they, or the country, is better off since Obama took the reins.