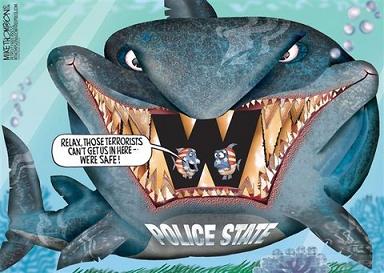 A lawsuit was filed by non-profits and reporters whose work related to conflicts in the Middle East and who said they feared being detained under Section 1021 of the law.

Judge Forrest concluded that the plaintiffs had proven their case and “injunctive relief was warranted and the public interest would not be dis-served by the issuance of an injunction.”

“A key question throughout these proceedings has been, however, precisely what the statue means – what and whose activities it is meant to cover.  That is no small question bandied about amongst lawyers and a judge steeped in arcane questions of constitutional law;  it is a question of defining an individual’s core liberties.  The due process rights guaranteed by the 5th Amendment require that an individual understand what conduct might subject him or her to criminal or civil penalties.  Here, the stakes get no higher: indefinite military detention – potential detention during a war on terrorism that is not expected to end in the foreseeable future, if ever.  The Constitution requires specificity and that specificity is absent from Section 2012 (b) (2). . .”

“. . .Constitutional guarantees require that criminal statutes carry an array of due process protections.  If it did not, then Section 1021 must be interpreted as follows:  Congress had declared that the U.S. is involved in a war on terror that reaches into territorial boundaries of the United States.  The President is authorized to use all necessary force against anyone he deems involved in activities supporting enemy combatants, and therefore criminal laws and due process are suspended for any acts falling within the broad purview of what constitute “substantially”  or “directly supporting” terrorists organizations.  If this is what Congress in fact intended by Section 1021(b)(2), no doubt it goes too far.  Although Section 1021(b)(2) does not strictly speaking, suspend the writ of habeas corpus, it eliminates all other constitutionally required due process. . .”

Judge Forrest also concluded that the provisions the government was defending in court could be used to target First Amendment activities since the government could not argued that activities protected by the First Amendment could not subject a person to indefinite military detention.  “They apparently wanted to keep options open in case they wanted to imprison someone in the future and all they had to support detention was speech.”

Since 9/11 the government  has attempted to claim powers that infringe upon our civil liberties and do it without any explanation on the basis that it pertains to ‘national security.’   Congress no longer functions as a check on the Executive Branch and Obama wants to keep it that way.  The Justice Department has already filed an appeal.   Let’s hope the next Judge has as much common sense and loyalty to the Constitution as Judge Forrest.

Since writing this Obama found another federal judge to issue a “stay of execution” against Judge Forrest’s decision which means that we are once again subject to “undue process.”   Obama’s attorney argued before the judge that the Forrest’s restoration of 5th Amendment Rights protection would do ‘irreparable harm.’

This gives one pause as to why it was so necessary for Obama to have this right of detention without due process restored so quickly.  What is he up to?  Are there plans on the table to use this law before the election?

← Jewish Support for Obama: It’s A Disease
Lies and Excuses To Hide Ineptness →