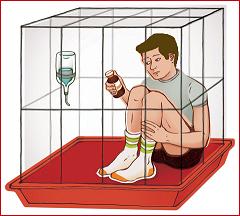 Lisa Martino-Taylor, a sociologist, amassed evidence that the U.S. military carried out top secret experiments involving the spraying of zinc cadmium sulfide with radioactive particles on residents of St. Louis, Missouri and perhaps in Corpus Christi, Texas during the 1950s and 1960s.  While the Military admits the spraying of these areas they deny adding radioactive particles to the mix.  Taylor’s research showed a lot of evidence that people, at least in St. Louis were subjected to military testing that was connected to a larger radiological weapons testing project.

Her researched linked the program to U.S. Radium, a company that  had  been found legally liable for producing a radioactive powdered paint that killed many young women who painted fluorescent watch tiles.   The Army does admit that they added a fluorescent substance to the compound they sprayed but the details of the added substance remains completely secret and likely will remain secret.  Taylor says that there is a strong indication that the fluorescent product used, given the level of extreme secrecy surrounding the St. Louis study, and the involvement of Monsanto, was radioactive.

I think Taylor’s research and conclusions are reliable, especially when you consider  the 1993 GAO report that indicated that the military had been engaging in secret radiation tests on humans since the 1940s.

Taylor’s research uncovered photographs showing how the particles were distributed as well as detailed descriptions of how the public was exposed in the name of keeping America safe.  Even local politicians were kept out of the loop.  St. Louis residents were only told that the Army was testing smoke screen technology to protect American cities from a potential Russian attack.

In Texas, the chemical was dispersed over large portions of the city from airplanes.  In St. Louis, the Army placed chemical sprayers on schools and public housing projects, as well as on station wagons for mobile spraying.  Taylor’s research revealed that in St. Louis the greatest concentration of spraying was focused on the Pruitt-Igoe housing complex located in Northwest downtown in the Carr Square neighborhood.  This complex housed some 10,000 people with low incomes, an estimated 70% of which were children under the age of twelve.

In response to Taylor’s research, Missouri’s U.S. Senators  McCaskill and Roy Blunt, have asked the Army to provide details of the potential health impact of and the possibility of a radioactive component to the Cold War era particle dispersal experiments in St. Louis and expressed concerns that the Army’s studies “may have violated”  ethics rules.  You got to love politicians.  The fact that the Army used American citizens as human guinea pigs without consent goes far beyond “maybe violating” ethic rules.

And it’s not like this is something new.  The Wellness Directory of Minnesota published a Brief History of Human Experiments that provide the following information on some human experiments:

In 1931 Dr. Cornelius Rhoads under the auspices of the Rockefeller Institution for Medical Investigations, allegedly infected human subjects with cancer cells.  While these charges were dismissed as nonsense by the government, one has to wonder if they were true especially when you consider that in 1911, Dr. Hideyo Noguchi of the Rockefeller Institute of Medical Research deliberately infected children with tuberculin at a Philadelphia orphanage.  In 1932 The Tuskegee Syphilis Study was conducted on 200 black men diagnosed with syphilis, who  were never told of their diagnosis, were never treated but were used as guinea pigs to follow the progression and symptoms of the disease. In 1940 Four Hundred prisoners in Chicago were infected with Malaria to study the effects of a new drug. In 1950 the Department of Defense began plans to detonate nuclear weapons in desert areas and monitor downwind residents for medical problems and mortality rates. In 1953 a joint Army-Navy-CIA experiment was conducted in which tens of thousands of people in New York and San Francisco were exposed to the airborne germs Serratia marcescens and Bacillus glogigii.

There have been numerous experiements performed in the U.S. including the deliberate infection of people with toxic and radioactive chemicals such as Thorium, Radium, Plutonium, and Uranium, surgical experiments, and tests involving LSD.  In many of these studies a large portion of subjects were poor, racial minorities, mentally disabled children, orphans or prisoners.

As late as 1986 a report to Congress revealed that the government’s current generation of biological agents including modified viruses, toxins and agents altered through genetic engineering.  And in 1987 the Department of Defense admitted that despite a treaty banning research and development of biological agents, it continued to operate research facilities at 127 facilities and universities around the nation.  In 1990 more than 1,500 six month old black and hispanic babies in Los Angeles were given “experimental” measles vaccine never licensed for use in the U.S.  In 1994 Dr. Farth Nicolson at the MD Anderson Cancer Center in Houston, Texas found that many returning Desert Storm veterans were infected with an altered strain of Mycoplasma incognitus, a microbe commonly used in the production of biological weapons.  In 1995 Dr. Garth Nicolson found evidence that the biological agents used during the Gulf War were manufactured in Houston, Texas and Boca Raton, Florida and tested on prisoners in the Texas Department of Corrections.   So in 1996 the Department of Defense had to admit that Desert Storm soldiers were exposed to chemical agents.

You can download and read the full “Manhatten-Rochester Coalition dissertation at this link.

2 comments for “Citizens With Rights or Guinea Pigs?”