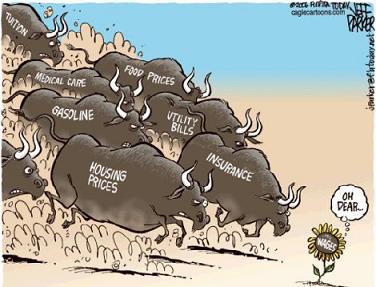 First they expected us to kiss the ground Obama walks on because his economic policies decreased the unemployment rate under 8% – even though the decline was accomplished by government new math,  estimates and lies.

Now they expect us to swallow an inflation rate hovering around 2%.   Anyone who drives or shops knows that is laughable.   The only place inflation is that low is in government’s delusional little mind.

The Bureau of Labor Statistics changed the way it calculated the Consumer Price Index (CPI) in 1980 claiming the change was needed to account for the substitution of products, improvements in quality, etc.   According to this new recalculated  CPI, consumer prices only rose a modest 3.1% for 2011.    If you recalculate the BLS data without the government’s mythological changes, the true inflation rate would have been closer to 10%.

Most of us have been deceived into thinking that high inflation is an inadvertent by-product of misguided or unlucky government policies.  Wrong.  According to Craig Smith, “The Uses of Inflation: Monetary Policy and Governance in the 21st Century” inflation  is used to devaluate the currency.  “Inflation can be a tool, an ideology, a form of taxation that secretly extracts the earnings, not only of Americans, but also of unsuspecting people in other countries.  Inflation can be a means of wealth redistribution, a mode of social engineering, and a device to weaken some and strengthen others, both within a nation or in the global community of nations.  Inflation can be a way to seize or exercise power.”

Anyone who goes to the grocery store knows government is lying.   Last year, if you shopped wisely, you could find a loaf of bread for around $2 – this year the average price is closer to $3.    And,  just when you think it couldn’t go any higher,  some economists are predicting grocery prices could increase another 14% this year due to the drought.

Gas prices have almost doubled in our area of the country.  Electric bills, water bills, car insurance, homeowners insurance, health insurance, cable bills, heating oil, tuition, etc.  – everything has increased more than 2%.  So how can the government perpetrate such an out-and-out fallacy with a straight face?  Remember, we are dealing with a government bureaucracy that gets paid to lie!

In December 1996, a committee to study the Consumer Price Index under the leadership of Michael Boskin, former Chief of the U.S. Council of Economic Advisers, presented its final report to the U.S. Senate.  The study concluded that in the CPI had been overstated in the last twenty years and since the government uses this index to adjust many statistics, reducing the CPI would improve perceived economic performance.    They recommended changes in the method of calculating CPI that would increase taxes and reduce entitlements making it easier for Bill Clinton to balance the budget.

While Boskin’s report recommendations were not formally adopted, a chance to increase taxes and reduce entitlement costs, was just too much of a good thing for the government to waste.

After all, keeping the CPI low reduces the correction for inflation on social security payments and veteran’s benefits and pensions.  Bureaucracy gains through increased income taxes from slowing adjustments in tax brackets and exemption mandates under the Economic Recovery Tax Act of 1981.

Every 10 years the BLS conducts a survey of consumer behavior to set up a “weighted market basket of goods and services” that supposedly represents typical outlays of the average citizen.  This basked is “adjusted” each ten years for changes in lifestyle.

The CPI-W claims to represent living conditions in lower middle class and poor urban households who get their primary source of income from wages and salaries.  The CPI-U includes nonwealthy urban consumers, the self-employed, retirees, and the unemployed.

The cost of living  for 50% of national income and 90% of financial wealth is totally ignored.

By adjusting the “basket of goods and services” each decade, the CPI can hide the reality of a population that is gradually sinking into poverty.

For example, if lower wages force Americans to take the bus to work, rather than drive, BLS will substitute the cost of bus fare for the cost of a car.  When the price of Sirloin gets too high, the BLS substitutes a cheaper cut of meat to reflect consumer behavior making it look like the cost of living has not increased.   If the cost of food climbs to the point that people have to live on starvation diets, the BLS ignores the increased costs and switch to measuring the cost of living at even lower standards.

By fixing the weights used on the “basket of goods and services” BLS can distort changes in the cost of living.  The government wins –  you lose!

In the real world – there is no typical consumer.  The CPI is just another government fantasy statistics that either overstates or understates the cost of living for almost everyone.

“Tax created by inflation is dirt cheap to collect and requires no audits or enforcement agents.  It simply sucks the lifeblood value out of everyone’s dollar like an invisible vampire. . .”  Ronald McKinnon