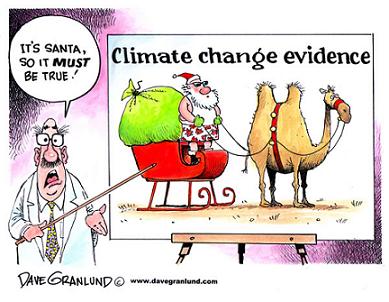 Pick up any 40 year old science book on chemistry, biology, geology, physics, astronomy or medicine and you’ll find a slew of “facts” and theories that have been proven wrong or are no longer the “consensus” view.  Climatology is no exception.

Back in the 1970s many scientists warned of global cooling and fretted about a new ice age that would expand glaciers, wreaking havoc.  The media reported that Meteorologists are “almost unanimous” that the cooling trend will “reduce agricultural productivity for the rest of the century” and “famines could be catastrophic.”  The CIA, NASA, the National Academy of Sciences and even John Holdren, Oama’s science adviser jumped on the ice age theory.

But even though global warming failed to materialize, tales of doom and gloom for an overheated earth remain the  standard fare  –   even in the face of  Climategate and miscellaneous shenanigans of the Intergovernmental Panel on Climate Change  which joined the dissection of Michael Mann’s hockey stick.

New theories about solar cycles, cosmic rays and the dominant role of solar activity in determining Earth’s climate are becoming far more common in books and peer reviewed research compendia of science based climate realism.  But, like a pack of hounds on a rabbit’s trail, environmentalist and leftist political agendas continue to push climate change as a means to drive us into the era of “eco-friendly” renewable energy and “fundamentally transforming” our economy and society.  With fracking and other new petroleum discoveries and extraction technologies proving beyond any doubt that we will not run out of oil or gas anytime soon, climate change is all they have left to push their Socialist agenda.

Rep. Ed Markey D-MA recently told Politico that he and others [democrats] would seek to pass cap and tax if they ever get control of both Congress and the White House.   I really don’t know why they bother – Lisa Jackson is in the process of instituting  it through oppressive EPA regulations, most of which will go into effect after the election.

The goal is to force Americans to turn to inefficient, unreliable, impractical, expensive, job killing energy sources.  At a mere 0.0395% of Earth’s atmosphere, carbon dioxide is only a trace gas.  Yet, it is the gas of life on this planet.  Without it all life would cease to exist.  However, many far left scientists and environmentalists insist that CO2 has supplanted the many complex and interconnected solar, cosmic, oceanic, planetary, atmospheric and other forces that have always driven climate change and that a further increase to 0.0450% would somehow push life and civilization past the point of  no return.

Dr. Willie Soon, natural scientist, meteorological statistician William Briggs and many others have pointed out that changes in solar radiation caused by sunspots have changed Earth’s temperature and climate for centuries.  Referring to data collected by the University of California-Berkeley Earth Surface Temperature project, Soon and Briggs note that “these peer reviewed results make it difficult to maintain that changes in solar activity play no or an insignificant role in climate change. . .The evidence in BEST’s own data and in other data we have analyzed is consistent with the hypothesis that the sun causes climate change, especially in the Arctic, Chin, and the United States.  BEST’s data also clearly invalidate the hypothesis that carbon dioxide is the most important cause of observed temperature changes across the United States.

Still more data has shown that neither average global temperatures, nor tornado and hurricane frequency and severity, nor droughts, rainfall, sea level rise or Arctic climate and weather patterns in recent decades differ measurably or significantly from historic norms, cycles or variations.

The hysterical of the far left would be funny except for the fact that they are using an agenda to justify policies that are trashing our economy.  Already Congress and the Obama administration are implementing draconian laws and regulations that make energy less reliable, affordable and available.  They have also destroyed American jobs, weakened our national security, caused consumer prices to rise, slowed our economy  and made us even more dependent on foreign energy supplies.

Needless regulations are prolonging the recession, keeping unemployment high, impairing civil rights, and hurting the poor, minority and elderly families, putting  energy, minerals, food, water, health care and opportunities out of reach for millions or even billions of people.

We don’t need to “fundamentally transform” our energy, economy or society.  We need to throw Obama and his cabinet heads and czars out of office,  and elect those who would concentrate on restoring our economy and putting Americans back to work.

← Obama Selling Out Gulf Coast To BP
If Obama were white……. →