“State sponsored murder has killed so many people that it is becoming routine, bureaucratic and pathological.”   Democratic Congressman Dennie Kucinich

350 drone strikes by the U.S. has killed as many as 3,378 people.  Of this number, as many as  885 were civilians and included women and children.  According to the Obama administration officials “government expects to keep adding names to the kill list, now called a disposition matrix.”

The program was created and expanded absent any oversight from Congress.  With the kill matrix the ultimate decision to kill rests solely in the hands of a single individual – the President of the U.S.

White House counter terrorism chief John Brennan has actually seized the lead in choosing which terrorists will be targeted for murder, establishing a new procedure for both military and CIA targets.  The effort concentrates power over the use of lethal force outside war zones within one small team at the White House.  Under this plan, Brennan’s staff compiles potential targets and then runs the names past agencies like the State Department at weekly White House meetings.

John Brennan was a former Bush CIA official who advocated for “enhanced interrogation techniques” such as water boarding.   Obama condemned Bush for using these interrogation tactics against terrorists,  and then  turned around and named its chief advocate as his Counter Terrorism Chief and then puts him in charge of making decisions as to who makes the Kill Matrix.  In May of this year Brennan defended the strikes as “ethical and just.”

That is hypocrisy at its worst.   Water boarding to obtain vital information that could save American lives is immoral.  Using unmanned drones that  kill innocent civilians is moral! 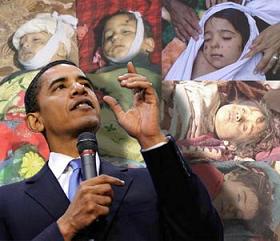 Researchers at the NYU School of Law and Stanford University Law School released a new study “Living Under Drones: Death, Injury & Trauma to Civilians From U.S. Drone Practices in Pakistan.”  The report details the terrorizing effects of living with drone attacks and the highly misleading public statements from the Obama administration about the strikes.

While noting that it is difficult to obtain precise information on the number of civilian deaths because of U.S. efforts to shield the drone program from accountability,  the report concludes that “while civilian casualties are rarely acknowledged by the government, there is significant evidence that drone strikes injure and kill civilians.”

As part of the kill matrix, the government has redefined a combatant as anyone within the vicinity of the target object.  This reflects a callous disregard for human life.  On what ground can Obama justify the killing of innocent women and children as collateral damage?

Ben Emmerson, an independent U.N. human rights researcher, announced plans to launch an investigation into the use of drone targeted assassinations because of his frustration with the Obama administration’s unwillingness to provide information on the strikes.  And it looks as if his investigation will take some time to complete as the White House has plans to extend the Kill Matrix for at least another decade even as the conventional war on terror winds down.

← New Executive Order expands Homeland Security
Big Brother Has His Eye On You! →