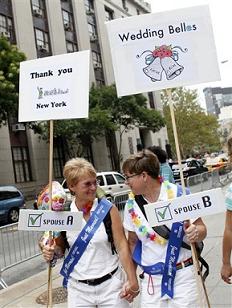 On November 6,  voters in Maine, Maryland and Washington will vote on whether to redefine marriage to include same-sex marriage.

Proponents only have to  is focus the public’s attention on individual gay people, show wonderful gay individuals who love each other, and ask the American public: Is it fair to continue to deprive these people of the right to marry one another?

The charge of racism is predicated on the profoundly false premise that race and sex (or gender) are analogous.  They are not.  While there is no difference between black and white, other than color, there are enormous differences between male and female.  That is why sports events, clothing, public restrooms, and some schools are routinely divided by sex.  But black sporting events and white sporting events, black restrooms and white restrooms, black schools and white schools would be racist and immoral.

If opposition to same-sex marriage is as immoral as racism, why did no great moral thinker, in all of history, ever advocate male-male or female-female marriages?  The equality of human beings of every race was a central tenet of Judaism, Christianity, Islam and other world religions but not one, neither Moses, Jesus, Buddha, Muhammad, Aquinas, Gandhi, not the Bible or the Koran or any other sacred text, nor even one single anti-religious secular thinker of the Enlightenment – ever advocate redefining marriage to include members of the same sex.

To argue that opposition to same-sex marriage is immoral is to argue that every moral thinker, and every religion and social movement in the history of mankind prior to the last 20 years in American and Europe was immoral.  About no other issue could this be said.  Every moral advance has been rooted in prior moral thinking.  The anti-slavery movement was based on the Bible.  Martin Luther King, Jr. was first and foremost the “Reverend Martin Luther King, Jr.” and he regularly appealed to the moral authority of the scriptures when making his appeals on behalf of racial equality.

Same-sex marriage is the only social movement to break entirely with the past, to create a moral ideal never before conceived.  It might be right, but it might also be an example of the moral hubris of the present generation, the generation that created the self-esteem movement.  After all, you need a lot of self-esteem to hold yourself morally superior to all those who preceded you.

Is the man-woman definition of marriage fair to gays who want to marry?  Maybe not.  But, whether a policy is fair to every individual can never be the only question society asks in establishing social policy.  Eyesight standards for pilots are unfair to some who wish to fly.  Orchestra standards are unfair to many talented musicians.  A mandatory retirement age is unfair to many who wish to continue working.  Wherever there are standards there will be unfairness to some.

So, the question is whether redefining marriage the most radical way ever conceived – indeed completely changing its intended meaning – is good for society.  The answer is NO.

There is a fierce battle taking place to render meaningless the man-woman distinction, the most important distinction regarding human beings’ personal identity.  Nothing would accomplish this as much as same-sex marriage.  The whole premise of same-sex marriage is that gender is insignificant – it doesn’t matter whether you marry a man or a woman – only love, not gender matters.

Same-sex marriage will hasten the end of the male-female distinction and of any significance to mothers and fathers as distinctive entities.  It will mean that those who, for religious or other reasons, wish to retain the man-woman definition of marriage will be legally and morally as isolated as racists are today.

The history of left-wing policies has largely consisted of doing what feels good and compassionate without asking what the long-term consequences  will be, what Professor Thomas Sowell calls “Stage One Thinking.”   That explains the entitlement state.  While it may have sounded noble,  the long-term consequences have been terrible: economic ruin, a demoralized population, increasing selfishness as people look to the state to take care of their fellow citizens.

It is not enough to mean to do well in life.  One must also do well.   There are reasons no moral thinker in history ever advocated same-sex marriage.

← Nancy Pelosi’s Secret Fundraiser with Islamists, Hamas-linked groups. Democrats are in bed with America’s enemies!
TOLERANCE IS THE NEW RELIGION →