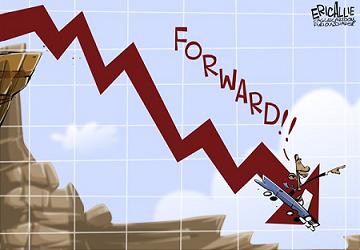 Elections do have consequences.   4 years of wasted government spending on green projects, pork projects, donor payback, and stimulus money for  companies too large to fail, along with a TARP program that a current lawsuit calls a ponzi scheme,  has destroyed our economy.   Obama ignored job and economic growth to push an agenda.  Now, that agenda has come back to bite us.  What will 4 more years bring?

According to Peter Schiff of Euro Pacific Capital, there will be a dollar and bond crises.  Loose monetary policy is dangerous and will lead to a catastrophic correction.  “The more you delay, the bigger it will be.”  Schiff expects a massive crash over the next year or so as the bond market bubble, coupled with the dollar, collapses under the weight of excessive debt.  Schiff, by the way, accurately predicted the housing bubble.

Future unemployment numbers are not looking good and not  even the government’s fairy tale math  can put a positive spin on it!

This is just the tip of the iceberg.  As a result of ObamaCare,  Welch Allyn is cutting 275 jobs; Dana Holding is cutting but no figures yet; Styker is closing its New York plant and cutting 96 jobs in December and then slahing 5% (1,170) of its global workforce; Boston Science is cutting 500 jobs in 2012 and another 500 in 2013; Smith ^ Nephew is cutting 770 jobs; Abbott Labs is cutting 700 jobs; Covindien is cutting 595 jobs; Kinetic Concepts is cutting 427 jobs; St. Jude’s Medical is cutting 300 jobs and Hill Rom is cutting 200.

And, just wait  until the new EPA regulations  are forced upon America!

← Big D Donors Got The Gold Mine – Taxpayers Got The Shaft
VA. Gov. Bob McDonnell: Caving To The Health Care Lobby →