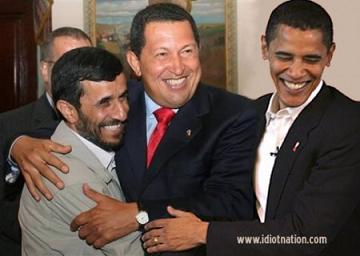 Did the Democrats take lessons from Putin, Chavez or Ahmadinejad to put Obama back in power for another 4 years?

According to Daniel Greenfield,  Obama received over 99% of the vote in districts where GOP inspectors were illegally removed and then  won 100% of the vote in 21 districts in Cleveland, before getting another  lucky break!

Half the Democratic ground game is voter turnout. The other half is voter fraud. Voter ID would make an impact on this game, but that would be just like the return of Segregation or something.  At least according to the NAACP, the Justice Department and left leaning Democrats everywhere.

When asked about the 141% Supervisor of  Elections Gertrude Walker stated, “They  may have had something like that in Palm Beach County, but we’ve never seen that  here.”

Rep. Allen West demanded a recount Wednesday as his close re-election bid  against Patrick Murphy resulted in Murphy having a lead of less than 3,000 votes  with 100 of the precincts reporting.  The St. Lucie County Supervisor of Elections office clearly ignored proper rules  and procedures, and the scene at the Supervisor’s office last night could only  be described as complete chaos. Given the hostility and demonstrated  incompetence of the St. Lucie County Supervisor of Elections, we believe it is  critical that a full hand recount of the ballots take place in St. Lucie County.  We will continue to fight to ensure every vote is counted properly and fairly,  and accordingly we will pursue all legal means necessary.

Palm Beach Judge David Crow denied West’s motion for a recount and seizure of the voting machines  after Attorneys for the County argued that to grant West’s motion would be “an invitation to chaos” and would “throw the entire system in disarray.”

The whole voting system is already in disarray.  In 2008 it was ACORN and the voting dead and that is more than likely the case in the 2012 election.    The Justice Department (and I use that term loosely) fought hard to keep states from purging voter roles prior to the election as well as trying to prevent new voter id laws from going into effect.

Numerous problems were reported throughout the country on election day of voting machines switching cast votes to another candidate,   and of voting machines that didn’t work.  ALIPAC claims that unions in Nevada were registering illegal aliens and encouraging them to vote.  Republican officials in Pennsylvania said just under 70 Republican election officials were rejected or refused entry by on sight Democratic voting chief judges.  There were also allegations of  bus loads of Somali immigrants brought into Ohio voting precincts to vote for Democrats.

Was the election stolen?  Well, when you have more votes than voters, it’s a distinct possibility.  In the coming weeks and months there will be more stories like Ohio and Florida.

Professional hacker, Roger Johnson at  Argonne National Lab  says that all you need to hack a voting machine is a basic knowledge of electronics and $30 worth of RadioShack gear.

In at least four states – Pennsylvania, Virginia, Colorado, and Florida  there are no paper ballots created by the voting machines so it would be easy to alter voting results.  Without a  paper trail and corrupted software, you can have the display on the voting machine screen show whatever you want to display and then, after the voter leaves, record something completely different” according to Richard Kemmerer, a computer scientist in charge of the University of California, Santa Barbara, Computer Security Group.

According to Barbara Simons, a computer researcher, “the risk of cyber manipulation is quite real.  Most people don’t understand that these computer based voting machines can have software bugs or even malicious software in them.”

The domination of the business of voting machine manufacturers by a few large corporations makes it impossible to know if the machines are really secure because the manufacturers claim their source code is a trade secret.