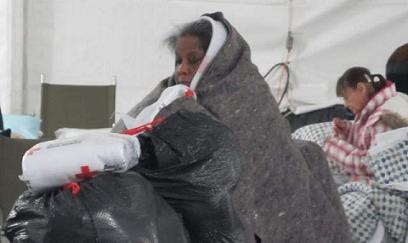 “The response since the time the president got all this praise and credit and press ops has been abysmal,”  Rudy Giuliani told Fox News Channel. “FEMA is as much a failure now as at the time of Katrina.”

Under Katrina, the drive-by media reported all sorts of horror stories, even those those that were later proved false.  It was all Bush’s fault – from the failing berms protecting New Orleans – to the looting and the inability of FEMA to get water to refugees in the Superdome.

With Sandy, the liberal media told us  that it gave Obama a chance to look presidential – maybe a boost in the polls and a chance to win re-election.

It is liberal politics as usual in New York.  While it isn’t enough that there are still 200,000 customers on Long Island without power and no chance of even getting power on for another two weeks,  or that out-of-state line workers were turned away by the Long Island Power Authority because they were non-union, or charges that ILPA linemen are standing around because they don’t have a foreman to tell them where to go or what to do, or that transformers are being repaired but not powered,  according to Mike Francesa of WFAN 660 Radio, but now, our favorite liberal lunatic,  NY City Mayor, Michael Bloomberg has  outlawed food donations to the homeless shelters because he wants to monitor the salt, fat and fiber eaten by the homeless.

And how about those lovely FEMA “concentration” camps?

No media is allowed into “Camp Freedom” as the government is afraid the truth will reach the masses. City and government buses have been converted to transport displaced civilians and emergency workers into the camp as a major snow squall and bad weather continue to plague the region.

The third world conditions at “Camp Freedom” are despicable to say the least as residents have stated:

“Everybody is angry over here. It’s like being prison,” said Sotelo, who grew up in Wayne. “I’ve been working since I was 10. I’ve been on my own since I was 16. And for things to be so bad that it’s pissing me off, that tells you something.”, according to app.com.

“Sitting there last night you could see your breath,” said Sotelo. “At (Pine Belt) the Red Cross made an announcement that they were sending us to permanent structures up here that had just been redone, that had washing machines and hot showers and steady electric, and they sent us to tent city. We got (expletive). “The elections are over and here we are. There were Blackhawk helicopters flying over all day and night. They have heavy equipment moving past the tents all night.”

No media is allowed inside the fenced complex, which houses operations for JCP&L’s army of workers from out of the area. The FEMA website indicated on Monday that there had been a shelter for first responders, utility and construction workers to take a break, although the compound now contains a full-time shelter operated by the state Department of Human Services.

Sotelo scrolls through the photos he took inside the facility as his wife, Renee, huddles for warmth inside a late-model Toyota Corolla stuffed with possessions, having to drive out through the snow and slush to tell their story. The images on the small screen include lines of outdoor portable toilets, of snow and ice breaching the bottom of the tent and an elderly woman sitting up, huddled in blankets.

As Sotelo tells it, when it became clear that the residents were less than enamored with their new accommodations Wednesday night and were letting the outside world know about it, officials tried to stop them from taking pictures, turned off the WiFi and said they couldn’t charge their smart phones because there wasn’t enough power.   “Until 11 (Wednesday) night they had no medical personnel at all here, not even a nurse.  After everyone started complaining and they found out we were contacting the press, they brought people in. Every time we plugged in an iPhone or something, the cops would come and unplug them. Yet when they moved us in they laid out cable on the table and the electricians told us they were setting up charging stations. But suddenly there wasn’t enough power.”

And if this is not enough for you yet or if it is all unbelievable, in New York City they are nowanticipating  using prison facilities as temporary housing facilities for displaced citizens, solving the need for portable FEMA camps.

The New York Post reports that there are as many as 40,000 New Yorkers needing shelter and that “displaced victims”  (that is political correctness for homeless) could be housed in dorms at Staten Island’s shuttered Arthur Kill Correctional facility – razor wire and all.   “Of course, the challenge is the fact that it was closed a year ago and all of the major infrastructure components, such as boilers and wastewater system, were deactivated.”

Obama promised “no bureaucracy – no red tape.”    According to Red State, over the weekend, a source (who wishes to remain anonymous) reported that contractors contracted—as well as, generators, water, and other supplies paid for—by FEMA are being idled at New York’s Floyd Bennett Field by “red tape” requirements, while unions deploy their members and many storm victims sit in the dark. There are tons of supplies in trailers,  as well as rows and rows of water that are not being delivered.  So much for the “no red tape, no bureaucracy” that was promised nearly two weeks ago.

Obama showed up a couple of days after Sandy for a photo-op before heading back out on the campaign trail.  While New Yorker’s were dumpster diving for food, Obama was in Las Vegas attempting to separate donors from their money.

Don’t get me wrong – I don’t blame Obama for the hurricane or the damage, but I do blame him for not making any attempt to fix the problem and the lap-dog media for white-washing the situation.  If Bush was responsible for FEMA’s failures in the aftermath of Katrina – Obama bears as much responsibility for FEMA in the aftermath of  Sandy.