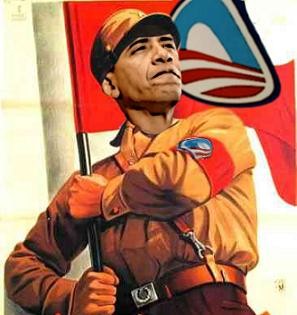 It seems that free speech and truth are under assault and Hitler’s brownshirt brigade has taken root in America.  While Adolf Hitler was rising to power in Germany in the 1930’s,  he had a group of people dressed in brown shirts to silence the masses so that  free speech and truth did not exist, unless, of course, it agreed with Hitler’s agenda.

Hitler’s brownshirts had the power to arrest anyone on the grounds of suspicion that they were an enemy of the state.  No evidence – no proof required!  Hitler encouraged co-workers, neighbors, friends, children, family or anyone with an axe to grind to turn in a perceived enemy of the state.  Once arrested, prisoners were taken to concentration camps or prisons and most were never seen again.  Sounds a lot like DHS’s “See Something, Say Something” campaign.

This is happening today in America, except the brownshirts are now called progressives.   They are a shifty and dangerous group of people,  the true fascists of today.  You have to watch out for them, because they are the complete opposite of what they preach.  They preach  for tolerance and against hate, yet if your views differ from theirs they are the first to attack.  They stand on tolerance, yet they do not know the meaning of the word.

When it comes to the brownshirts, I mean progressives;  if it is not their idea of truth, the rest of us must not believe it and God forbid we should speak out. You see free speech and truth belong only to the Liberals.

The Brownshirts’  command and control structure today is built on surveillance technology,  social controls, and policy tactics developed by the military in Iraq and Afghanistan, all controlled by the Department of Homeland Security and the National Security Agency.

Just this year Congress passed the NDAA  giving the president the power to have any American citizen arrested, without proof of wrongdoing, and detained indefinitely without due process of law.   Obama also claimed sweeping power to target and kill U.S. citizens anywhere in the world, exempt from judicial review.

Stellar Wind, the new NSA facility that will be connected to listening posts, spy satellites and NSA data centers, making it one of the most powerful spy agencies in the world, and it plans to turn all of that  surveillance apparatus on U.S. citizens.

Government is using social media to spy on you through the pretext of preventing biological attacks.

On the local level, government has spent $31 billion since 2003 to create mini CIA domestic fusion centers where local police can monitor your activities and share the data with the FBI, NSA and DHS.  Local police are equipped with license plate scanners to track your daily movement which is also logged into a data storage system.  All new vehicles will come equipped with  a black box spy system that not only monitors how you drive, but where you drive through GPS tracking, and can remotely start, stop or slow your vehicle on a whim.  And  worse, DHS is now giving grants to local governments for FBI MOBILE, a portable biometric data collection system used by the military to create civilian ids in Iraq.

Police can now use canine units at traffic stops to sniff vehicles and if the dog reacts positively for drugs, they have the right to search (and seize) your vehicle, all in the name of the “war against drugs.”  Scientific America reports that 90 to 95 percent of U.S. currency carries traces of cocaine so if they bring out the dogs the chances of your arrest are pretty good.

The government wants smart meters installed in your home to monitor, analyze and control home power usage while the CIA is working with private firms to develop the ARM chip that can be added to almost every kind of electrical appliance, giving government the ability to locate, identify, monitor and remotely control them through technologies such as radio frequency identification, sensor networks, and energy harvesters. In addition, Samsung has come out with a “smart tv” with a built in internally wired HD camera and microphone that is equipped with face tracking and speech recognition, giving government, Samsung and hackers unprecedented snooping ability much like they already have with your computer.

You’re being brainwashed into a Cashless Society whereby the government can track and monitor everything you buy, where you shop, how much you spend, etc.

The TSA is planning a national campaign to expand the use of Mobile Body Scanners to train stations, bus stations, subways and any other form of ground transportation, which is also part of a broader TSA program to expand road and highway checkpoints.

There is a major technology effort underway by IBM, Lockheed Martin and Northrop in cooperation with the FBI to create the Next Generation Identification System small enough to be installed anywhere to secretly capture biometric data using facial recognition, iris scanning, etc.  Facebook and IPhone are targeting their own users photo’s with facial recognition software.

DHS is working with companies to develop  remote lie detector sensors to record physiological values like your heart rate and eye movement to determine if you are telling the truth.  You can expect this technology to end up on the end your law enforcement’s flashlight much like the breathalyzer.

DHS is considering the use of new Backscatter X-ray machines and MRI Technology for airport screening.  And the government is proposing the Trusted Travel Program supposedly to make it easier for frequent fliers to sail through security that will require extensive biometric scanning, background checks and the submission of extensive personal information.

DHS is pushing  “Intellistreet Systems”  to replace existing street lights with new models containing loudspeakers and microphones to broadcast official announcements and record conversations for government analysis, all in the name of national security.

Custom rules have changed to allow the government to check the content of your computer when you reenter the U.S. from a foreign country.  DHS is also working on the development of an advanced handheld card reader that can ascertain whether you’re carrying a credit card, debit card or prepaid card because beginning next year  under an amendment to the Bank Secrecy Act, the Finance Crimes Enforcement Network will require travelers to disclose the value of any prepaid card you are carrying.

Bill Clinton has suggested the creation of a federal Ministry of Truth to monitor liberty oriented websites to counter all those “right-wing lies.”

There are also numerous devices for controlling protesters in cases that the government will determine to be “civilian unrest.”

There are rules under development to require farmers to register tractors and combines as Commercial Vehicles and obtain a driver’s license even to operate them on private land.   Obama’s executive order 13575 created the White House Rural Council which is a power grab to consolidate the future of food and energy, to people and businesses that create them.  Executive order 10998 allows the government to take over all food resources and farms in national emergencies.

The government has rewritten custom rules to allow them to check the contents of your computer if and when you reenter the U.S. from a foreign country.

The Enhanced DNA Collection Act is now law in 24 states requiring felons to submit to bodily tissue or fluids collection which can be expanded at any time.  In California, Texas, Arizona and New Mexico laws require the purchase of more than one gun a day (or over several days) to be reported to the Department of Justice.

Rolling Stones Magazine did a story that accused the FBI of inventing terrorists and using that invention to dupe the public into believing that evil domestic terrorists are lurking everywhere.    The truth is America’s freedoms have been under attack since the turn of the century but it took 9/11 to bolster the “never- let-a-crisis-go-to-waste” crowd into coming out of the shadows.   The biggest threat to America’s freedom is not Islam – it is the powers that be!

Never forget –  Liberals, Progressives, Socialists, Communists, Marxists are all cut from the same hunk of wood