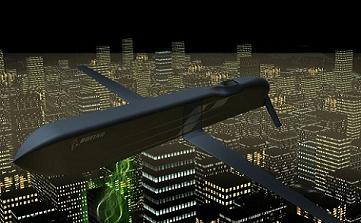 On October 16, 2012,  the US Air Force successfully tested a missile that zaps electronics without inflicting damage on people or buildings.

The High Power Microwave Advanced Missile Project (CHAMP) cruise  missile was built by Boeing’s Phantom Works at a cost of $38 million.   Launched from a bomber, the missile flew over a test building in the Utah desert and successfully zapped the entire spectrum of electronic systems along with equipment in six other targets.Until the announcement on October 22, the project had been shrouded in secrecy and thanks to the lap dog media – still remains  largely unknown.

Unlike the Electronic Magnetic Pulse (EMP) the “electronic death ray” doesn’t use a nuclear warhead or explosive shot through a wire coil to generate a pulse over an area.   It simply aims a precise beam of high energy microwaves at its target or targets as it flies over.

The missile destroys equipment through connections to power cables, communication line and antennas.  Unlike any existing system, CHAMP permanently destroys all electronics, as well as rendering inoperable any radar that might detect it, nor is it thwarted by bunkers.

The electronic death ray  can take out ships, tanks, fighter planes and missile systems.  It could also be used to take out facilities for the development of nuclear weapons in countries such as Iran.

Alan Dershowitz wrote back in August that The International Atomic Energy Agency (IAEA) has reported that Iran has “more than doubled” its development of centrifuges in an effort to accelerate its capacity to develop nuclear weapons.  Iran is today stronger diplomatically than it has been in years. Iran is neither isolated nor alone in a world in which nonaligned nations form a majority at the United Nations.

The sanctions, while hurting the Iranian economy and making life more difficult for the average Iranian, are having zero impact on the Iranian nuclear program, which according to objective intelligence reports, is gathering steam and moving even more quickly toward its ultimate goal of a nuclear weapon that will be a game changer.  An Iranian nuclear weapon will end any dream of non proliferation. It will protect Iran’s surrogate terrorists, such as Hezbollah, under a formidable nuclear umbrella. And it will make an eventual nuclear war more likely. That is why President Obama rightfully took the containment option off the table and put the preventive military option squarely on it.

Only if the Iranians truly believe that they will never be allowed to develop nuclear weapons will the combination of diplomacy and sanctions work. The message has to be this: Look, sanctions hurt. Diplomatic isolation from first world powers is costly. So why incur this pain and cost if you know you will never be able to achieve your goal?

Right now, despite President Obama’s best efforts,  the Iranians  are not sufficiently confident that he would carry out his threat.  They need to be made to understand that they have only two options  – to stop – or to be stopped.

Obama has repeatedly said he will not allow Iran to develop nuclear weapons beginning with  4 statements  in 2008, one in 2009, two in 2010, 6 in 2011 and 6 just this year, the last of which was at the U.N. when he said that “. . . the U.S. will do what we must to prevent Iran from obtaining a nuclear weapon.   Now while Jeffrey Goldberg of the Atlantic firmly believes all these statements and veiled threats actually show Obama’s resolve, I don’t.  And apparently, neither does Iran.

But, with the development and successful testing of the “electronic death ray” maybe  Obama will finally put an end to Iran’s disbelief!

← The Supreme Court: Eroding Rights of the People
Clinton and State Dept. Being Sued →